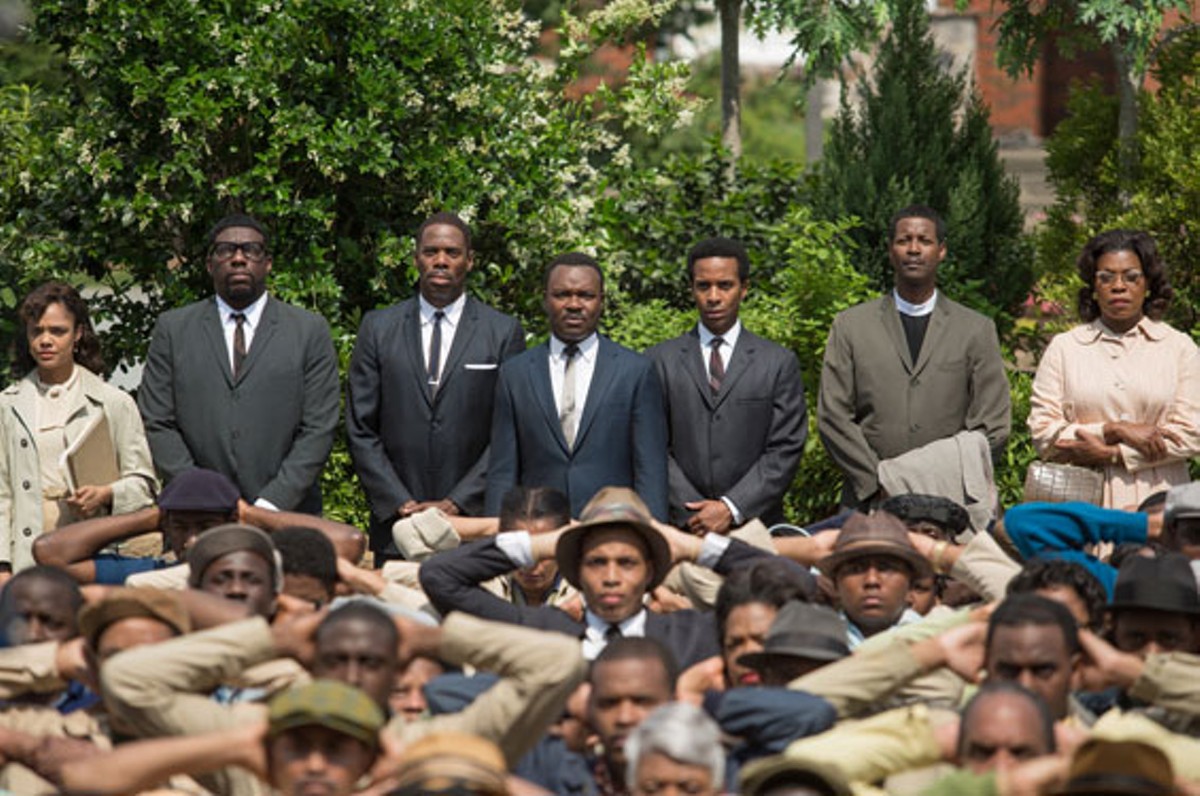 Describing Ava DuVernay's quietly remarkable Selma to a friend, I caught myself referring to the Civil Rights Era as a historical event, a thing of the past, and then backtracked. The killing of Michael Brown, Eric Garner and Tamir Rice at the hands of police officers — not to mention the Supreme Court's dismantling, in June 2013, of the Voting Rights Act, a quieter yet perhaps more insidious event — all indicate that the Civil Rights Era is ongoing, because it has to be. Selma, in addition to being a meticulously detailed historical drama, is the right movie for the moment: In telling the story of the three marches — from Selma to Montgomery, Alabama — led by Martin Luther King in 1965 as a protest against restrictions that prevented African Americans from registering to vote, DuVernay has also opened a window of hope on the present. If change was painful then, we shouldn't expect it to be easy now.

Change always costs us something, and DuVernay — working from a script by Paul Webb — faces that truth unflinchingly. The film opens with King, played by David Oyelowo, fussing with the ascot he's supposed to wear to accept the 1964 Nobel Peace Prize; he complains to wife Coretta (Carmen Ejogo) that it's just too pretentious, that his friends back home would mock him for "living high on the hog." But his mind is really on something much more pressing than the propriety of this length of silk, and at this point DuVernay dramatizes a key event that haunts the speech he's about to give, a tragedy that had occurred a year earlier: A cluster of little girls descend a church stairwell, chattering about the best ways to get straight, beautiful hair. They're wearing dresses with short, bouffant skirts and gloves with lacy cuffs; they carry tiny Sunday purses barely big enough for a hankie and a few pennies.

The explosion that kills them is, in the hands of DuVernay and cinematographer Bradford Young, a slow-motion swirl of dust and splinters and shards of glass. We also get a glimpse of one small airborne patent-leather shoe. The violence of the moment may be too muted for some and too heartstring-plucking for others. But what else could she do with one of the most villainous and godless acts of the last half of the 20th century, the murder of four girls, at the hands of white supremacists, in a Birmingham church in 1963? DuVernay gets the moment as right as anyone could. If it knocks the wind out of you, that means you're still breathing.

With Selma, DuVernay has pulled off a tricky feat, a movie based on historical events that never feels dull, worthy or lifeless; it hangs together as a story and not just part of a lesson plan. The movie is at once intimate and grand in scope: An early scene shows Annie Lee Cooper (played by Oprah Winfrey), who would become a voting-rights activist, trying to register in her home county and being turned away, stymied by a blockade of absurd regulations. Another shows King in the Oval Office conferring with Lyndon B. Johnson (played by a superb Tom Wilkinson, who gets even the hunch of Johnson's shoulders just right), urging the president to push forward with the Voting Rights Act. LBJ, having succeeded the previous year in the gargantuan task of pushing the Civil Rights Act through Congress, drags his heels. Johnson knows how much he needs King politically, but he's not above using his power in devious ways: In one subtle and chilling scene, he gives FBI honcho J. Edgar Hoover (Dylan Baker, who manages to come off as both parched and oily) tacit permission to try to break up the King household as a way of undermining the movement.

LBJ eventually ended up on the right side of history, but King had to nudge him toward it. King also had to negotiate disputes between the Southern Christian Leadership Conference and the Student Nonviolent Coordinating Committee, two groups with similar goals but bitter differences about how to reach them. (Stephan James is marvelous as the young John Lewis, the SNCC activist who would become a Georgia congressman, now in office for 28 years and referred to by his colleagues as "the conscience of Congress.")

Selma lays out the challenges faced by organizers and regular citizens alike in planning and executing the marches. On their first attempt to cross the Edmund Pettus Bridge, they're run down and clubbed by Sheriff Jim Clark and a phalanx of policemen on horseback; the cops descend upon the peaceful marchers, many of them elderly, kicking and beating them with batons. DuVernay proves both discreet and vigorous in her orchestration of violence, emphasizing its horror without beating the audience up.

She's similarly judicious in depicting the shooting death of activist Jimmie Lee Jackson (Keith Stanfield), again at the hands of policemen, and the beating death of James Reeb (Jeremy Strong), the minister who came down from Boston to join the march and was killed by white supremacists. There's nothing graphic in Selma, but you feel the weight of every act.

DuVernay — whose previous features include the 2012 drama Middle of Nowhere — has put together an exceptionally fine ensembles of actors, among them Common (as SCLC activist James Bevel), Tessa Thompson (as, in FBI parlance, "female agitator" Diane Nash) and Tim Roth (who makes a wheedling, weaselly George Wallace). Ejogo brings fine, gradient shading to the role of Coretta Scott King. More than just a put-upon wife, she's a woman who looks at her husband every day — a great man and a flawed human being — and wonders when, not if, he's going to be taken away from her.

As King, Oyelowo is the movie's grave but radiant center. DuVernay isn't afraid to tangle with some of the thornier issues of King's legacy: Though he advocated only peaceful protest, he was canny enough to know that provoking his opponents into violence was the surest way to draw attention to the cause. Oyelowo plays King as a man who knew what he was risking every day — not just his own life, but the lives of others. In one of the movie's quietest, most piercing moments, he calls a friend in the middle of the night. She rolls out of bed to answer the phone. "I just need to hear the Lord's voice," King tells the woman, who turns out to be Mahalia Jackson (played by Ledisi Young). She obliges, with an impromptu version of "Take My Hand, Precious Lord." Selma shows King in moments of weakness and triumph, and though it stops well short of portraying him as saintly, he's still a hero for our time. In the past year, as Americans we've had too many occasions to look at ourselves and realize we don't know who we are anymore. Selma reminds us we're capable of better.