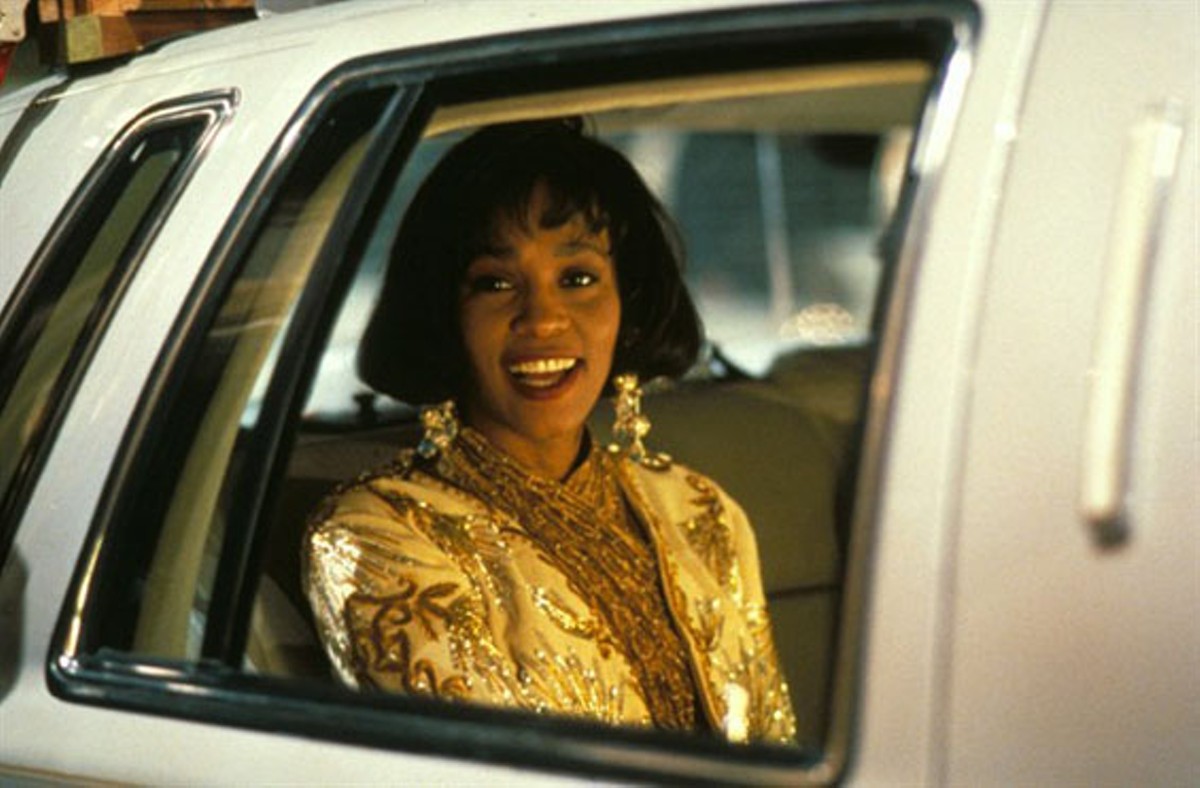 Whitney Houston in The Bodyguard.

In anticipation of the remake of the 1976 girl-group melodrama I (which didn't screen in time for our deadline) — Whitney Houston's posthumous film appearance and her return to movies after a fifteen-year absence — we look back at the handful of celluloid performances by the woman once known as "the Voice." Houston's pipes certainly get a workout in her slim filmography, often called upon to invigorate dead spots in dull pictures. Her scripted roles occasionally hint at the fine actress she might have become — but nothing is quite as harrowing or tragic as her unscripted performances in interviews or on reality TV during the last decade of her too-short life.

The Bodyguard (1992)
In her big-screen debut, Houston stars as Rachel Marron, a pop singer and actress who, after being menaced by a sociopathic fan, hires a former secret service agent played by Kevin Costner for protection. "You probably won't believe this, but I have a reputation for being a bitch," she tells a stony Costner. Viewers might also have a hard time being persuaded by Houston's diva pantomime, seemingly inspired by Diana Ross (who was to play Rachel when the film, Lawrence Kasdan's first script, was first proposed in 1976) in Mahogany. Ersatz though they might be, her celebrity tantrums are at least rooted in some semblance of reality, unlike her onscreen romance with Costner. Houston's most disastrous real-life match occurred four months before The Bodyguard's release: her marriage to Bobby Brown. As for other actual pairings, could Nicki, Rachel's sister and "personal secretary" in the film, have been modeled on Robyn Crawford, Houston's close friend, executive assistant, and long-rumored lesbian lover? The Bodyguard launched Houston's cover of "I Will Always Love You," the then-bestselling single of all time by a female artist, which its original composer, Dolly Parton, sang ten years earlier to another overweening male costar, Burt Reynolds in The Best Little Whorehouse in Texas.

Waiting to Exhale (1995)
Forest Whitaker's adaptation of this 1992 bestseller by Terry McMillan (who co-scripted) finds Houston — as one of a quartet of dissatisfied, Phoenix-based African American women — sharing an easy chemistry with coleads Angela Bassett, Loretta Devine and Lela Rochon. As aspiring TV producer Savannah (her project: working on a segment about Colin Powell), Houston remains entangled with a married man, an old flame from Denver played by Dennis Haysbert, while doling out no-nonsense advice to her friends. "Girl, what do you expect him to say — 'I'm a crackhead'?" Savannah huffs to Rochon's character, Robin, who's unsure whether her swain is really on the stuff. That line anticipates precisely what Diane Sawyer wanted Houston to admit in their infamous 2002 "crack is wack" sit-down. Waiting to Exhale itself is a window into the future, serving as a higher-end — and more sexually frank — template of the women's melodramas that Tyler Perry would start making a decade later. Both Bassett and Devine, supremely talented actresses who deserve better, have made movies with the man behind Madea. Had she lived, would Houston have, too?

The Preacher's Wife (1996)
Penny Marshall's wan remake of The Bishop's Wife (1947) opens with Houston, backed by a church choir, belting " Hold on, Help Is on the Way." This listless, protracted film stirs to life whenever Houston, whose marriage to a pastor (Courtney B. Vance) is beginning to fray, sings to the Lord — or his close second, Denzel Washington, playing an angel sent to earth during yuletide to help the couple fall in love again. Houston is no match against inveterate scene-stealer Jenifer Lewis, in a supporting role as her mother. But considering the amount of drugs Houston consumed during filming, as she admitted during her lengthy interview with Oprah in September 2009, the fact that she made it through the shoot at all seems nothing short of a Christmas miracle.

Cinderella (1997)
Houston's production company, BrownHouse, was one of several behind this Disney TV movie, which aired on ABC. Among the multiracial cast — including Brandy as the first African American to star in Rodgers and Hammerstein's version of the fairy tale — Houston has a small role as the fairy godmother. Sporting a mass of blond-highlighted corkscrew curls and a gold, bejeweled cape that could have been designed by Gustav Klimt, Houston, her arms outstretched, believably preaches and sings self-empowerment to her charge (and to all young girls watching) as she reminds Cinderella, "There is music in yoooouuuuuuuuu." But when she speaks, we hear the first hints of the hoarseness and raspiness that would be so alarming during her long chat with Oprah twelve years later. If only someone had waved a magic wand over Whitney in 2005, making her appearances in Being Bobby Brown disappear forever.