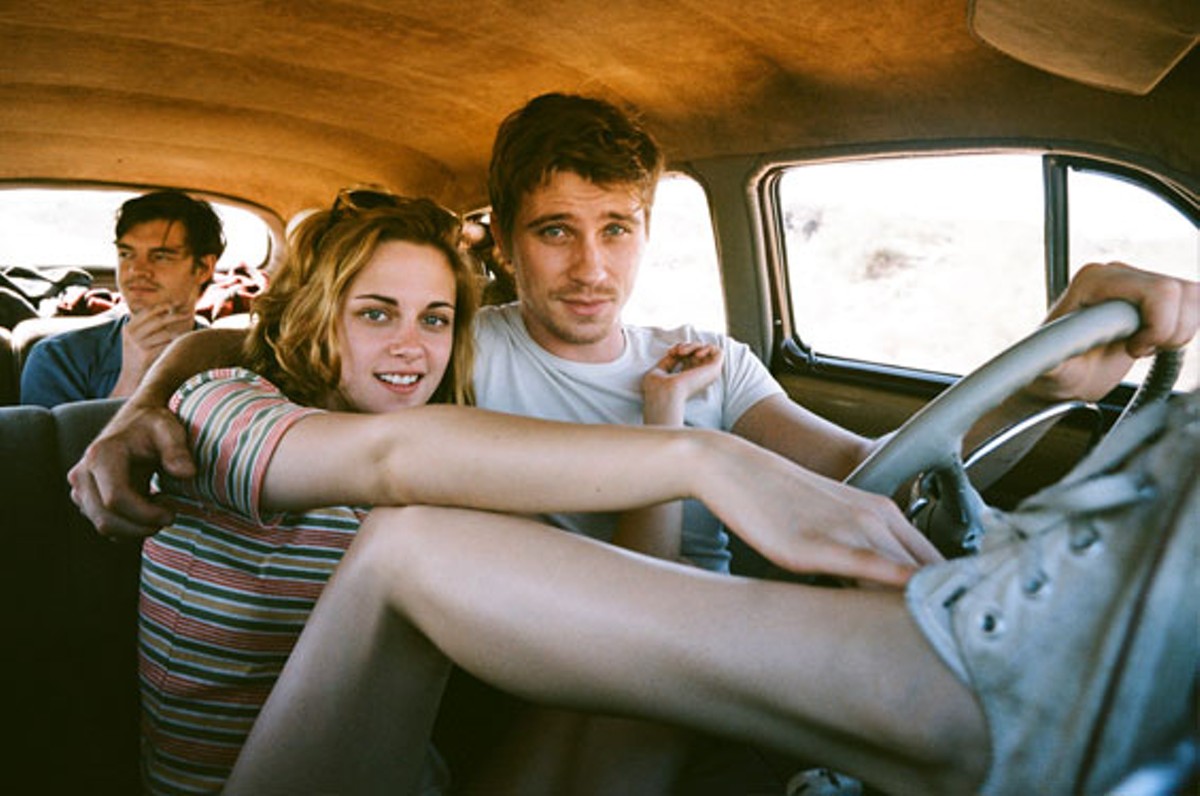 There's traffic from Silver Lake. That's why Kristen Stewart and Garrett Hedlund, the stars of On the Road, are late to the Benedict Room of the Four Seasons Hotel in Beverly Hills. We're as psychically far from Jack Kerouac's Beat gospel as you can get: fidgeting under crystal chandeliers in a $400-per-night hotel, with guests in comfy white robes riding gilded elevators and maids pushing breakfast trays of eggs Hollandaise and medicine ball–sized avocados.

The journey from scroll to screen has been an equally strange odyssey. Since Kerouac published his sex-, drugs- and satori-searching novel in 1957, false starts and "unfilmable" rumors have lengthened its odds of adaptation. The author once sought Marlon Brando to play Dean Moriarty, the book's infamous thief/wildman and Kerouac's trim-hipped "Western Kinsman of the Sun" (Kerouac assured he could handle the narrator/protagonist Sal Paradise, based on himself). Two decades later, Francis Ford Coppola acquired the rights and famously struggled to bring the book to life, with actors Colin Farrell, Ethan Hawke, Brad Pitt and Billy Crudup variously attached as male leads. We were one German investment group away from On the Road as proto-slacker parable.

A decade later, aided by several European and Latin American co-financiers and Walter Salles, director of The Motorcycle Diaries, the $25 million adaptation premiered to mixed reviews at May's Cannes Film Festival. The local unveiling occurred during November's AFI Fest at Grauman's Chinese Theatre with an after-party at the Hollywood Roosevelt Hotel. There was an electro-funk mash-up DJ, a shadow light projection for Shellback Caribbean Rum and the dull iridescence of a thousand iPhones and bald agent scalps. No whiskey was served.

It's two days after that Hollywood night on a weatherless Southern California Monday morning. Early November. 9:17 a.m. With silver eyes and wine-dark hair, Kristen Stewart is sitting in front of me and we're not talking because Hedlund still hasn't shown up and what small talk can you make with the 22-year-old, tabloid-tormented star of Twilight. In person, she's pretty but severe, as though her face is all elbows.

When her co-star finally arrives, Stewart offers a sisterly hug with a sense of relief that suggests she's acutely aware of how awkward it is to be interviewed by people who know every uncomfortable (and possibly spurious) facet of your existence.

Hedlund is her opposite. If Stewart is shy and pallid, and balsamic salad-thin, Hedlund is broad-shouldered, farmer-tanned and blond. The 28-year-old Midwesterner has the loquacious confidence and aw-shucks ambition of a young congressional chief of staff. As a movie star, he is in the Armie Hammer–as-Winklevii mold. She is an L.A.-born goth locker pin-up for kids who define old-school as before Instagram arrived on Droid phones.

The question before them is: What is On the Road even supposed to mean when you can Google Earth and Yelp your way across the heartland?

"I think [the Internet] gives people the urge to travel to further and more remote locations to get their kicks ... to find lands that are untouched by human hand," Hedlund says, with slang indicative of the time he spent researching the Beat muse Neil Cassady, Kerouac's model for Moriarty.

There was the cast's three-week Beat boot camp that included Skype tutorials from an old Kerouac colleague about the proper way to break Benzedrine capsules with beer bottles. In order to get into the spirit of the book, Hedlund estimates that he filled up 100 notepads on multiple treks across the country's surviving backroads.

Stewart was originally cast at 17 to play Mary Lou, née Luanne Henderson, the sexualized child bride worshipped and scorned by Moriarty and Paradise.

"I'm 100 percent nostalgic for times that I haven't lived in ... when there was less insignificant stimulation," Stewart says, tapping her foot with nervous energy, jangling the copper bangles around her wrists, folding her T-shirt with her hands and mostly looking down. "If you're not watching a TV show or downloading something, you're bored. Back in the day, there was less to do, people had to use their minds."

Stewart speaks infrequently and with caution, cognizant that even her most banal sentences are parsed with vice presidential scrutiny, or at least NBA All-Star. After all, most basketball franchises can't sell merchandise like Team Edward. Hedlund, whose previous big credit was Tron: Legacy, handles most of the talking — staying true to the dynamic of the film.

"I've always romanticized the late '40s and '50s — the cars, jazz, the open roads and lack of pollution," Hedlund says, business-casual in a navy blue dress shirt, the top button unbuttoned; his chest is nearly hairless. "Now there are more vehicles, less hitchhikers, more billboards and power lines and stuff. People wrote wonderful long letters that took months to receive and now everything is email. "

Both reiterate the idea that the book's timelessness is immutable. Even though a contemporary Kerouac could have seen Cassady's conquests on Facebook, the actors point out that young people will always be hypnotized by the amphetamine prose and intoxicating ideas of freedom and rebellion.

"Anybody that wants to walk out that door and leave home for a few months and rely on themselves instead of fate might have some interesting stories to tell," Hedlund says.

"I don't think there's ever going to be a point when there aren't a group of people who have varied expectations of what they want from fate. You gravitate toward those people and you do things you couldn't do alone," Stewart, also a big Henry Miller fan, adds. "That's why the book has never been not popular amongst people pushing and running after something."

We talk for a little while about the characters, their models, jazz, their Beat reading list. Inside the Actors Studio stuff — none of it is very interesting and neither is entirely unaware of that. Then Stewart's publicist whisks her out and she says "nice to meet you" with more sincerity than she needs to.

Hedlund talks a little more about his road trips and research. But what really stands out isn't one of his own stories but one from Salles, the director, via Hedlund, about a pilgrimage to the Bay Area to meet Beat poet and Kerouac comrade Lawrence Ferlinghetti.

"They were on the streets of 'Frisco and they looked over and there's cars and traffic jams, and all these billboards and signs and advertisements and bright lights," Hedlund says, jabbing at why On the Road's ideas are indelible yet inimitable. "Then Ferlinghetti pointed and said, 'See ... there is no more way."