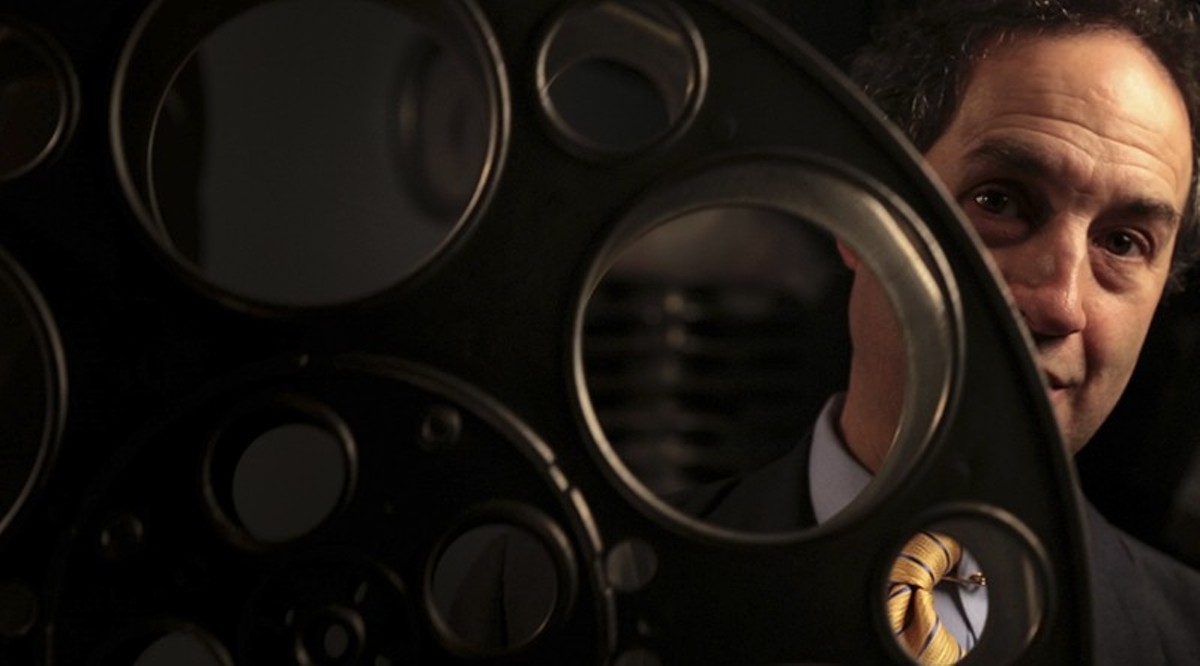 The Dying of the Light

Look at ads for any movie-related enterprise and you're likely to find strips of sprocket-holed film or metal reels. The logo for Wehrenberg Theatres, for example, shows two unwinding film reels. The opening trailer for every IFC Films release is accompanied by the whir of film moving through a projector gate. How many people sitting in a Wehrenberg auditorium or watching the latest IFC release realize that there's probably not a single film reel or strip of celluloid anywhere in the building, or that at most theaters the hum of a projector hasn't been heard in years?

Allow me a digression: When I worked in a movie theater — many years ago — I met projectionists who could detail the history and technical specifications of every piece of equipment in the building. We had an array of ancient and dangerous electrical panels that would not have looked out of place on the set of Frankenstein, and the switch that powered our sound system had a handwritten note stating that it had been installed in 1929 — less than two years after the New York premiere of The Jazz Singer brought the silent era to an end.

That equipment was part of a process that, aside from a few improvements to the sound system and the expanded aspect ratios that appeared in the 1950s, had survived from Citizen Kane to Star Wars with minimal change. A century after the films of Edison and the Lumières, the basic technology behind what we think of as the movies was still being used in thousands of theaters around the world.

That long-standing technology changed rapidly and abruptly when the exhibition business, under pressure from the major film studios, converted to digital projection. First tested publicly seventeen years ago, digital equipment is now used in more than 95 percent of U.S. theaters. Most film studios discontinued offering even the option of a 35mm print about two years ago.

The Dying of the Light, directed by film historian Peter Flynn, is both a celebration of the nuts-and-bolts apparatus behind screening a movie and an elegy for its departure. Drawing our attention to the activity that usually goes on unnoticed behind our backs, Flynn tells an engrossing story: The history of cinema told not in terms of stars and studios but in tubes, shutters and sprockets.

Flynn speaks to projectionists with decades of experience: Some now retired, some hammering away at revival houses, film festivals or anyplace else where 35mm prints are still in use. He digs around through the rubble of old projection booths and movie palaces, many abandoned more than three decades ago. Sharing the enthusiasm of his subjects, he lingers on the mechanical details, the buzzing start-up engines, the threading of the reels, the lighting of the carbons. You can forgive the occasional dips into sentimentality by the old hands as they return to their work. There is something magical about the process that turns a strip of static images into a living, moving world, and Flynn's look behind the curtain only enhances it.

Film projection is, as Flynn and his subjects state many times, a link to the past, a combination of old traditions and old equipment, but the film also covers more recent developments, which may be useful in providing a perspective for audiences who have never known anything but the multiplex. We see how changes to the projection system (like putting entire feature films on a single platter instead of multiple reels) gradually reduced the numbers of working operators, how modern theater owners faced the challenge (and expense) of digital conversion (the answer: give in or give up), how film continues to be used in large formats like IMAX, and, in an up-to-the-minute coda, even fits in the recent restoration of 100 old 70mm projectors, resurrected at the whim of Quentin Tarantino for the release of The Hateful Eight last December.

Ultimately, Flynn and the on-screen projectionists know that the battle has been lost, that the rush to digitalization has already changed the way movies are seen and shown. Smaller theaters, especially those in less populated areas, are dwindling. Revival houses will have a harder time getting prints of old films. Projectionists, whose number has been dwindling for the last few decades, have been replaced by computer operators. Ironically, as The Dying of the Light points out more than once, talented projectionists operated in a kind of invisibility. If you noticed the reel changes or the adjustments to the light and focus, they weren't doing it right. Flynn's film draws overdue attention to their craft just as it turns into a disappearing act.