The Hippopotamus Is Charming Adaptation of the Stephen Fry Novel 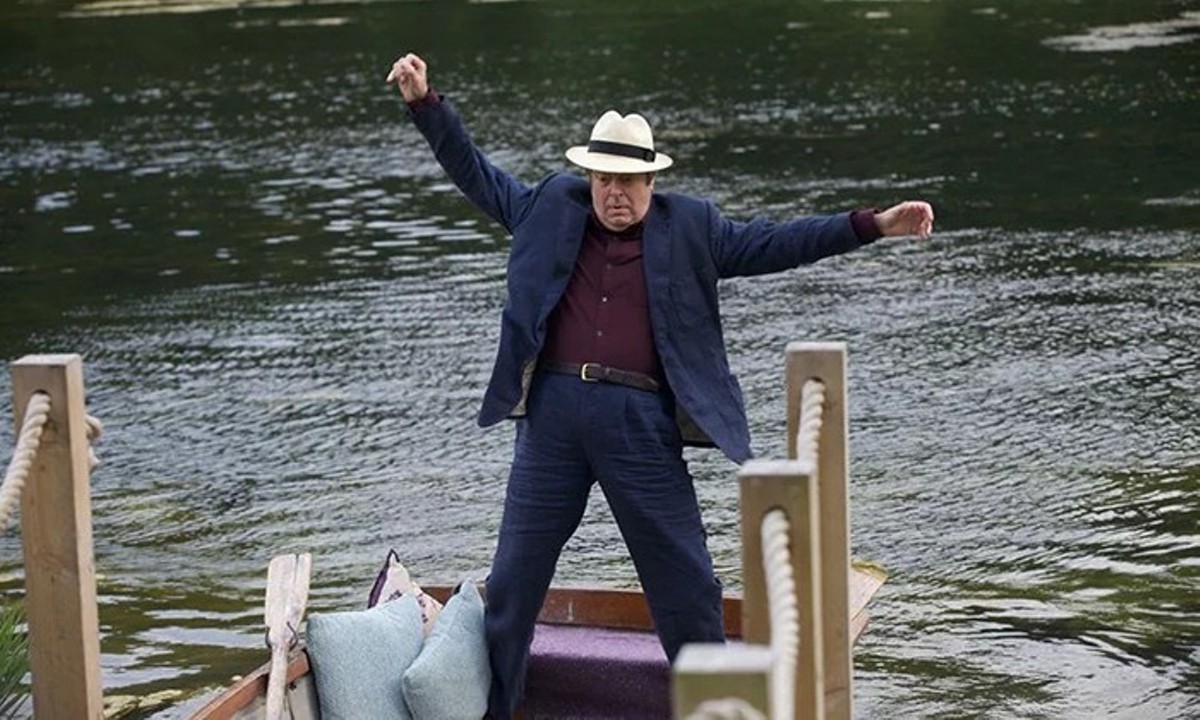 Directed by John Jencks. Written by Blanche McIntyre, Tom Hodgson, John Finnemore and Robin Hill. Based on the novel by Stephen Fry. Starring Roger Allam, Emily Berrington, Matthew Modine and Fiona Shaw. The Hippopotamus is available on disc from Lightyear, and on several streaming services.

Stephen Fry is a national treasure. Okay, he's not our national treasure, but even on this side of the Atlantic, there are plenty of opportunities to observe the English renaissance man as he pursues more than a few of his seemingly infinite interests. He's done Shakespeare, played a hobbit, hosted quiz shows, written five novels and three memoirs, narrated video games, written a weekly technology column for the Guardian and made documentaries on subjects ranging from gay history to Richard Wagner. Even Mrs. Stephen Fry, the Twitter account of his (entirely fictional) "poor downtrodden wife" holds the interest of more than 100,000 followers.

It's tempting to see a little of Fry — or at least the dark id of the author — in Ted Wallace, the hero of The Hippopotamus. In fact, when the film began, I thought it was Fry providing the off-camera narration. It's not, but the film is based on Fry's second novel.

Our protagonist here is a once-lauded poet who has become a bitter, hard-drinking theater critic. As played by Roger Allam, he also recalls the late Christopher Hitchens, minus the politics. He's disheveled but fueled by a reservoir of strong opinions and an overflowing disgust for much of the world, both sentiments given frequent expression in rude but colorful language. He states that a young woman "may have been conceived on a visit to Middle-earth" and describes a disagreeable idea by explaining that "the notion hung in the air like a piss-filled Hindenburg."

The Hippopotamus is a satire on mysticism and belief that is part comedy of manners, part Agatha Christie mystery highjacked by P.G. Wodehouse. It begins when Wallace, having lost his position after staging an intervention from his seat during a particularly egregious production of Titus Andronicus, has a chance encounter with his goddaughter Jane. Jane has been diagnosed with cancer, but claims to have been miraculously cured by her teenage brother David. She asks the skeptical Wallace to visit her family estate to confirm her brother's alleged powers, so he dutifully heads for to the country manor of the fabulously wealthy Lord Logan (an underused Matthew Modine), a long estranged friend. Stumbling through the countryside, Wallace is more irritated than shocked by his godson — and less by his miraculous claims (and related sexual obsessions) than by the discovery of the young man's struggling efforts at poetry.

As directed by John Jencks, The Hippopotamus is a modest, straightforward film, carried largely by strong performances from Allam and Fiona Shaw as Lady Logan. It saves its ambitions for the ideas overflowing Fry's novel, its satiric disgust at contemporary life and its measured humanist skepticism about unconfirmed miracles and shaky beliefs.

The film hints at Wallace's redemption (the title alludes to a T.S. Eliot poem, which points out that the creature, despite his imposing presence, is "only flesh and blood"). But it's at its best when it simply lets him vent his outrage at half-baked ideas, at bad poetry ("You don't wait for inspiration to vomit bliss over you"), at the world at large. There is redemption at work in The Hippopotamus: A humble film is saved by the sardonic outpourings of its bigger-than-life hero.