Triumph of the Troll: Grub-eating Boxtrolls thrive in moral grayness 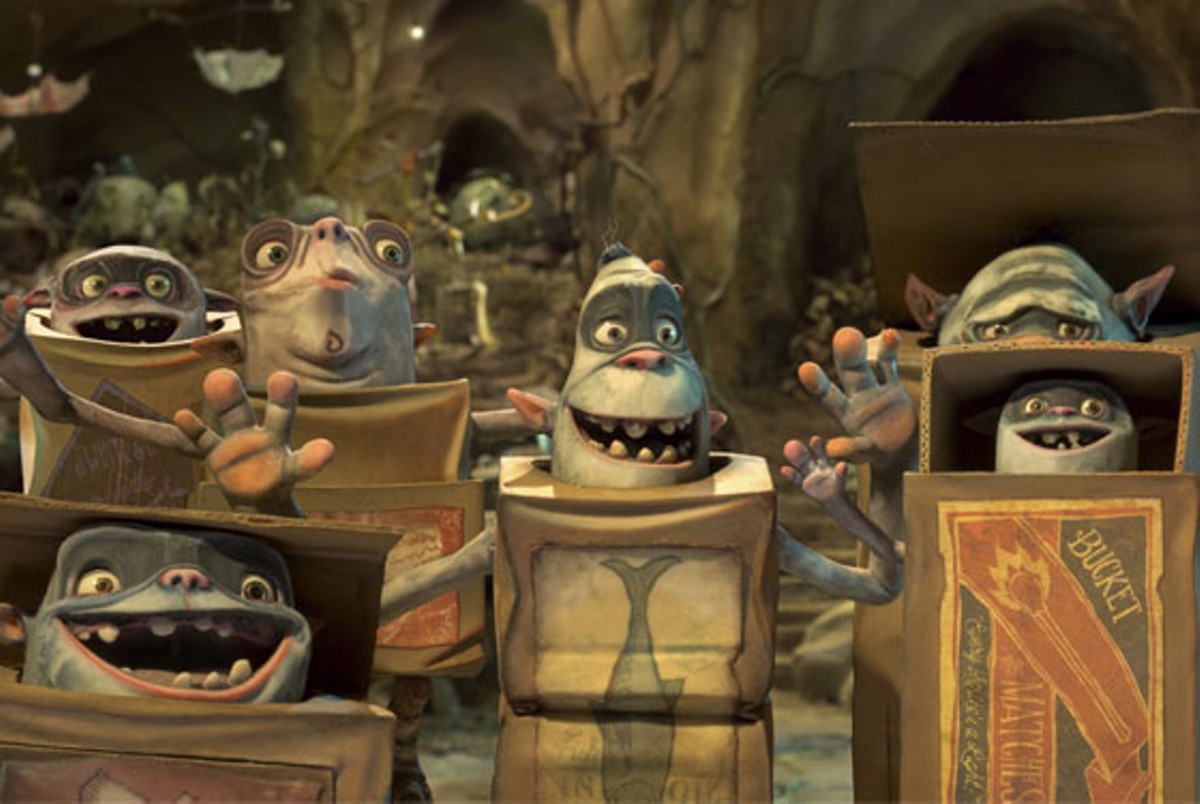 Triumph of the Troll: Grub-eating Boxtrolls thrive in moral grayness

The Boxtrolls is a kiddie charmer that makes you laugh, cower, and think of Hitler. That's an unusual trifecta, but then again, this is an unusual film. If the German Expressionists were skilled at stop-motion animation, they'd have already made it. This is cartoon Caligari, a fable set on a hillside village crammed with cobblestone streets that look like old photographs of the Frankfort ghetto. Nothing is perfect. The doorknobs are crooked, the clothes are dirty, and the humans' faces are smudged with pinks and blues, as if Wassily Kandinsky had painted them on a bender.

The Boxtrolls themselves are monstrous creations: one part Nosferatu, one part hairless cat. We first spot one sprinting into the sewers with an infant — more on that boy in a second — but we're meant to love them, which for children into grody things is easy to do. The Boxtrolls munch on grubs, babble like babies, and act like Legos, climbing on each other like staircases and, at night, nesting cardboard flap–to–cardboard flap like a hoarder's dream.

Ten years ago, they took ownership of that human boy (Isaac Hempstead Wright), named him Eggs, and have raised him like a Boxtroll. When excited, he joins them in thumping on his chest like a gorilla. And if he's noticed that he's the only one in his family who can't tuck his arms and legs into his box like a turtle, well, that's just fine by him. But above ground, villainous Archibald Snatcher (Ben Kingsley) is using Eggs's abduction as an excuse to exterminate the Boxtrolls, which the film shows in a hushed, devastating montage of their cuddly cardboard cube shrinking night by night. (As there are no female Boxtrolls, reproduction is out of the question — and don't think too hard about how, then, they came to exist.)

Immediately, directors Graham Annable and Anthony Stacchi assure us that logic isn't important. This world operates as if it were created by Mad Libs. Snatcher is destroying the trolls because he wants to earn a white hat. Men with white hats like Lord Portley-Rind (Jared Harris) are important, we learn, because they're allowed to eat cheese. Cheese parties matter simply because Snatcher's upset he isn't invited — he's actually grotesquely allergic to dairy — but it's the point, or really, the implied power, that counts. This is logic that makes sense to children, who already navigate their lives looking up to people who care deeply about things they can't understand. Cheese or credit cards, what's the difference?

But The Boxtrolls' emotional logic is dead on. This is a story of propaganda, genocide, suppression, servitude, and apathy. In short, it's the story of the Jewish nightmare of the 1930s, and of dozens of other terrible trials that have happened throughout the ages. The arc is always the same. An ambitious climber scapegoats a minority group for his own benefit, and the masses don't disagree. They're either focused on their own wealth, like Portley-Rind's heaping stacks of brie and cheddar, or fooled by false claims. Here, a self-serving stage actress (also Kingsley) puts on a nasty play about how the Boxtrolls kidnap and kill children, and Annable and Stacchi cut to the crowd roaring for vengeance. It's like outtakes from a Leni Riefenstahl film. And unlike the rest of the film, the so-called crime is no metaphor — blood libel accusations have been leveled against the Jews for over a thousand years in Europe, and we saw shades of them again this summer in Israel, on both sides of the struggle.

What's smart about The Boxtrolls is that even the brightest townspeople have been suckered into siding with the wrong side. When Portley-Rind's headstrong daughter Winnie visits Eggs in his home, she disappointedly whines, "I was promised mountains of bones!" The film asks children to parse not just good versus evil, but the gray area of good people who do evil — and grayer still, the good people who see evil and do nothing about it. Bleakest of all: the victims who refuse to fight back. It's sophisticated stuff, hammered home just a little too hard by two of Snatcher's three Boxtroll-hunting henchmen, who continually assure themselves that they must be the heroes; otherwise, "why would they hide from us?"

The minions are just repeating a good joke from the British sketch show That Mitchell and Webb Look where one Nazi SS officer whispers to another, "Have you noticed that our caps have actually got little pictures of skulls on them? Hans, are we the baddies?" The gag has bite because it's a question that the 17 million German soldiers who fought in World War II apparently didn't — or couldn't — ask. How wonderful to find a cartoon for children that will.