Weiner Reveals the Nature of American Politics in the Internet Age 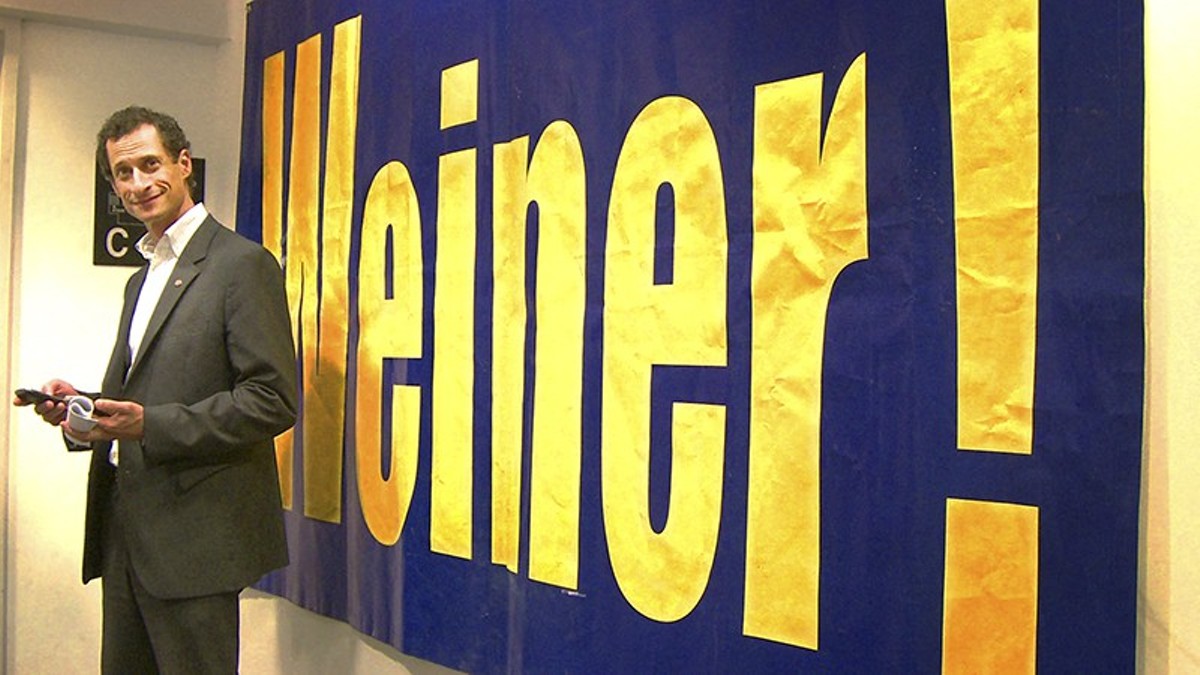 Carlos Danger, aka the Democratic Congressman from New York. COURTESY OF SUNDANCE SELECTS

If you want to see the exact moment when twentieth century politics put the image over the idea and the electoral process became a media event, take a look at Robert Drew's Primary, a documentary about the 1960 Wisconsin primary recently released by Criterion; it's a crucial piece of political history, often cited as the first example of cinéma vérité. In one sequence, candidate John Kennedy works a starstruck crowd like a pop star; he's young, his wife is glamorous, and in the background the recorded voice of Frank Sinatra chimes in with his endorsement, "Everybody's voting for Jack!" Drew then cuts to an event for Kennedy's rival Hubert Humphrey, where voters are welcomed at the door by an accordion-player singing "The Ballad of Davy Crockett." Goodbye 1950s, it's showtime!

In the very first scene of Weiner, a revelatory film about the political process in the age of celebrity, scandal and Twitter, former congressman Anthony Weiner mumbles, "This is the worst — doing a documentary about my scandal," as if the film itself was a form of punishment. And perhaps it is: Weiner is, among other things, a film about what it means to be a public figure in the digital age. Its subject is a political campaign shaped more by the monologues of late-night comedians and online comments than by policy, and a campaigner who seems at least as devoted to his smartphone as he is to his constituents.

Weiner served for more than a decade in the U.S. House of Representatives and had begun to earn a national profile, only to be brought down in 2011 by a notorious (and ineptly handled) online scandal: a photo of Weiner in his underwear, presumably intended to be sent privately, appeared on his Twitter feed. After initial denials, none of which were convincing, he resigned.

Two years later, he sent a message to Josh Kriegman and Elyse Steinberg, two documentary filmmakers who had contacted him about making a film about his fall from grace. (Kriegman worked for Weiner as his New York chief of staff before entering filmmaking.)

Weiner had initially turned down their offer, but now he was pursuing New York's mayoral nomination and was willing to offer full access as he leapt back into the public eye. With the filmmakers following every move, Weiner was back in action and, despite the earlier scandal, seemed on the verge of a major political comeback. Contra F. Scott Fitzgerald, Weiner was proving that there are second acts in American lives.

Unfortunately, Weiner's second act had a plot twist: A few weeks before the election, everything fell apart again with the discovery of more photos and text messages, sent with the ready-for-pornography alias "Carlos Danger." Weiner tried to convince voters (and himself) that he had always claimed that more photos would surface, but his refusal to pin down the exact number of his previous online contacts didn't play well with the press. Even worse, one of his pen pals, a young woman named Sydney Leathers (equally porno-ready), had decided to go public, hitting the Howard Stern show and hoping to set up a direct confrontation with Carlos himself.

At this point, Weiner sets an almost-comic tone — imagine The War Room refashioned as a TV sitcom. Weiner's campaign staffers agree to stay on, but their shell-shocked expressions reveal how little enthusiasm they have for a campaign that has transformed from a comeback story to 24-hour damage control. The campaign seems to take a back seat to the candidate's personal quest for self-preservation, with Weiner's wife Huma Abedin (currently vice-chair of the Clinton campaign) becoming a foreboding presence.

Remarkably, Kriegman and Steinberg remain in place, allowed to film almost everything. In a move that pleases no one but himself, Weiner fights back and allows himself a display of testiness in a remote interview with a sanctimonious Lawrence Davis, but it comes across as equal parts defensiveness and desperation. (The filmmakers underscore this by cutting to Weiner's half of the interview, alone in a studio shouting at the off-site Davis.) The once-fiery politician seems a bit lost. "I lied to them, I've got a funny name. They don't do nuance," he explains, as if trying to redeem himself to anyone who will listen to him for five minutes, the filmmakers included.

Is Weiner an act of cinematic voyeurism? Certainly — at least as much as any other example of cinéma vérité, but in this case it's also fueled by the indissoluble bond between its subject and the never-sleeping cycle of news/gossip/online celebrity, which is really just a new and refined form of exhibitionism. This, for better or worse, is the new political arena: Showtime and real time collide.

It's an extraordinary film, not just an example of filmmakers being in the right place at the right time (old, pre-Twitter concepts), but one of the most significant movies about American politics since JFK outshone HHH in 1960.