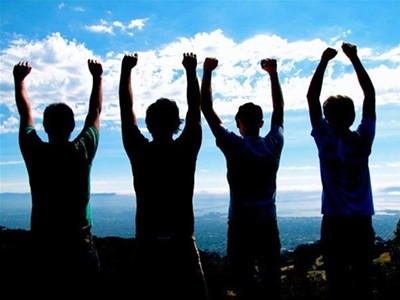 So Many Dynamos www.myspace.com/somanydynamos Neither sound demons nor indifferent crowds deter So Many Dynamos from tearing up stages from coast to coast. In fact, the more the spazzy dervishes tour out of town, the more polished their live show becomes. Old-school math-rock convulsions “Progress” and “We Vibrate, We Do” mesh perfectly with new, synth-saturated songs such as “New Bones” and “Ghosts.” Plus, it’s a small miracle that guitarist/vocalist Ryan Wasoba hasn’t yet slipped a disc from so violently throwing his body around onstage. -- Annie Zaleski Main Stage, 4 p.m.

Vandalyzm www.myspace.com/vandalyzm It’s more than just the V in his name that brings vaudeville to mind at Vandalyzm’s shows. The man does it all: He sings, he dances, and, perhaps most importantly, he makes you laugh. Usually flanked by his hard-hitting hype man Gotta Be Karim, Vandalyzm always has a few songs that get the crowd dancing, a few more that leave them nodding their heads in awe at his lyrical prowess -- and one, “Old Girl” his ode to MILFs, which has audience singing along and laughing. -- Keegan Hamilton Main Stage, 5 p.m.

Jon Hardy & the Public www.myspace.com/jonhardy For a skinny white dude, Jon Hardy sure packs a lot of soul into his performances with the Public. The songs from last year ’s Working in Love drip with emotion and conviction, and Hardy channels his passion directly into his microphone. The band plays a mish-mash of Americana-influenced rock & roll and Motown-indebted pub-rock, and the members of the Public bring the same intensity to their parts. And if you happen to catch a show when the Public is augmented by a horn section, get ready for an evening of E Street-worthy rave-ups. -- Christian Schaeffer Main Stage, 2 p.m.

The Feed www.myspace.com/feedrock It’s not a stretch to call Dave Grelle the hardest working keyboardist in town. When he’s not conducting the live incarnation of the Earthworms or sitting in with the Incurables, he leads the piano-centric trio the Feed. By running his electric piano through a barrage of effects, Grelle has erased the need for a guitar in high-energy, soul-powered rock & roll. Grelle is an engaging front man, and his co-conspirators Ben Reece (saxophone and bass) and Kevin Bowers (drums) contribute crack musicianship, harmony vocals, and no small measure of style and verve to the band’s live performances. -- Christian Schaeffer Blueberry Hill’s Duck Room, 4 p.m.

7 Shot Screamers www.myspace.com/7shotscreamers 7 Shot Screamers is such a good – nay, make that consistently good – live band, that it’s almost too easy to take the quartet for granted. Whether we’re talking about its many jaunts out of town (including its upcoming appearance at North Carolina’s Heavy Rebel Weekender fest) or its intimate gigs at the Way Out, the Screamers’ electric mind-meld of rockabilly, gutter-twang and punk always bleeds with unrestrained aggression, energy and (with apologies to Iggy) raw power. -- Annie Zaleski Halo Bar, midnight