A History of the Floating City, Reuniting for Two St. Louis Shows This Weekend 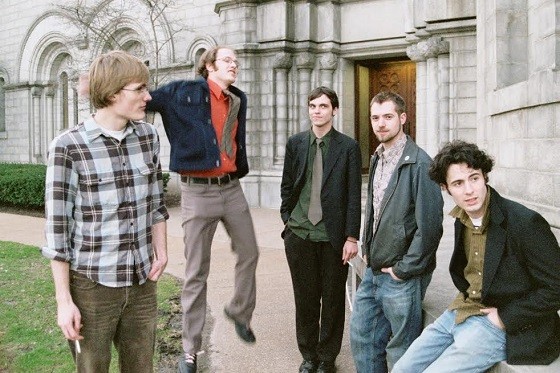 Melissa Boshans
The Floating City, back in its heyday.

There was plenty of alt-country, screamo, emo, punk, etc., happening in St. Louis in the early aughts, and even a few years prior. Too much, maybe -- the scene was ripe with want for something different. The Floating City rose to the occasion. The band moved fast, too. One moment they were four high school friends playing in a basement, and the next, they were debuting their first full-length album to a full house at Mississippi Nights.

"We had no idea what we were doing in the music business, and that was probably part of our charm," says drummer Mic Boshans. "We made 115 hand numbered pop-up books for the release and sold them for $5 a piece. No way we broke even on it."

Although the members of the Floating City were still pretty green at the time of their first release, it seemed to help more than hinder them. The original members of the band, Mic Boshans, Dan Meehan, Dan McKenzie, and Gareth Schumacher met while attending Brentwood High School.

"Dan [Meehan] and I started playing music together in high school," Boshans says. "Dan McKenzie played with us too, and we decided we need to be a real band. So our friend knew this guy named Gareth and we asked him to play too."

Staggered high school graduation years called for alterations in the lineup, which eventually expanded the band into a five-piece for a time.

"Dan [Meehan] was in school at Truman in Kirksville; Gareth was in Columbia. So we just got together when we could," Boshans explains. "A guy named Parker Schmitt stood in for a while and then when Dan came back we were suddenly a five-piece because we wanted to keep Parker around."

They found a rehearsal-friendly place to rent, affectionately dubbed "the Floating Apartment", which was where they began working on the demos that became the band's first EP, King Bear Frightened Child, and a full-length, Entering a Contest.

Once the first official recording was complete and released, the Floating City's fan base grew very quickly.

"We played a whole lot of shows at Lemp Neighborhood Arts Center and we never made any money," says Boshans. "But we did learn how the DIY scene worked, which I've been applying to my life regularly, even now."

There was one show which stood out as an indication that something bigger was starting to happen. Meehan recalls, "There was a showcase at Lemp when girls were crying out front because they couldn't get in -- the show was booked solid." Since they never made much money and there was usually plenty of room for more at shows, this was kind of a big deal.

"It was an all local bill, one of the only times we got paid for playing there," Boshans says. "It was Target Market, So Many Dynamos, the Happening and the Floating City. We sold the joint out."

When it came time to start recording the LP, the band turned to Chris Deckard at Penny Studios.

"We paid him a flat rate of about a thousand dollars and worked him non-stop for a month. It was a ridiculous amount of work we put him through," says Meehan.

"Never settle for salary with art-rock," Brown chimes in as everybody smiles and nods in agreement. "It was great how patient Chris was with us while we were just fumbling around in the dark trying to figure out how we wanted things to sound. He would just ask what we wanted to do next. We'd throw out an idea, he would think about it for a second, and he would then find a way to do it."

"He was less of a producer and more of a facilitator," Boshans says, "The word 'no' was not in [Deckard's] vocabulary. We had complete creative freedom."

Everything about Entering a Contest was as intricate as it was seemingly chaotic -- even the artwork, which originated as a giant mural methodically put together on the kitchen wall of their shared apartment.

"Dan McKenzie made the piece of art that became the cover of the Entering a Contest album," says Boshans.

"It was totally surreal seeing it in kitchen every day," Brown adds. "That piece of art is really important to anybody that lived in that place. I remember watching this madman chop up newspaper and look for patches of color. I had no idea what he was doing."

"When you see that thing go up a piece at a time, you don't really get the full picture," Boshans says. "I just remember one day it clicked and I saw what was actually happening there. I was blown away."