The Smoking Gun has tracked down a copy of Adele's rider for a North American tour that has since been cancelled due to throat surgery. Whenever she does make it over here, much of this is likely to remain in place, including a pagelong stipulation that everyone on the guest list, whether they got there through the band, the promoter, the venue or any other way, must make a minimum $20 donation to the Stillborn and Neonatal Death Charity (SANDS) based in the UK.

Fair enough -- the Tour Manager goes on to explain that the policy raised $13,000 on a European tour and this is a particularly elegant solution to the sometimes-tricky culture of guest-list favor. What we refuse to abide is her Xenophobic beer policy: "12x selection of bottles of best quality European lager beer. ie Becks, Stella Artois, Peroni etc North American beer is NOT acceptable." Italics theirs. We don't even need to tell you: If Adele thinks Becks is superior to pretty much any beer released by a massive, nationwide culture of microbrews, then we cannot be friends. Whatever, Adele: More Schlafly Christmas Ale for us. The full rider is below. 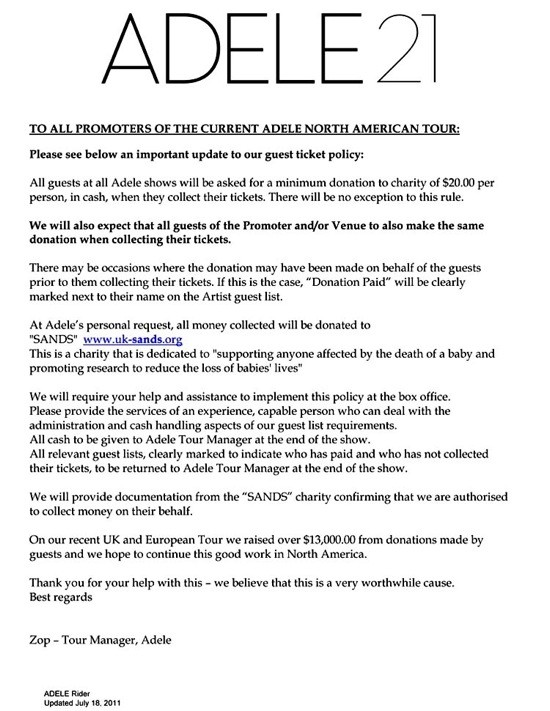