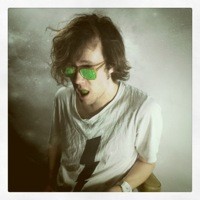 Ryan McNeely's Adult Fur continues to take form, with each show revealing a new approach to the music he's released over the course of two EPs. And now the project has its first music video courtesy of Damon Davis of Civil Ape and Scripts N Screwz. The clip accompanies "Space," and it gives the ethereal track the strange backdrop it deserves.

We asked McNeely a couple questions about how the video came to be, what he's planning next and his sole contributions to the shoot. Watch the video and read his answers below.

Kiernan Maletsky: Is this your first music video?

Why did you decide to work with Civil Ape?

Damon called me a day or two after I released Adult Fur ii and said that "Space" was his "new favorite song," and that he wanted to do a video for it. I was completely flattered. How could I decline?

Was the concept here yours, Damon's or a collaboration?

This video was completely Damon's work, from start to finish. The only thing I contributed was my presence and a lime.

Do you have any more videos planned/for which song(s)?

I do. I've contacted filmmaker Ingibjörg Birgisdóttir and asked her if she'd like to do a video with me. She's working on a documentary right now, but she said she liked the ep and would get back to me sometime in November. We may do a video for "Crackle" or "I Am Dream."