After a Decade of Awesome Shows, Foam on Cherokee Street to Close 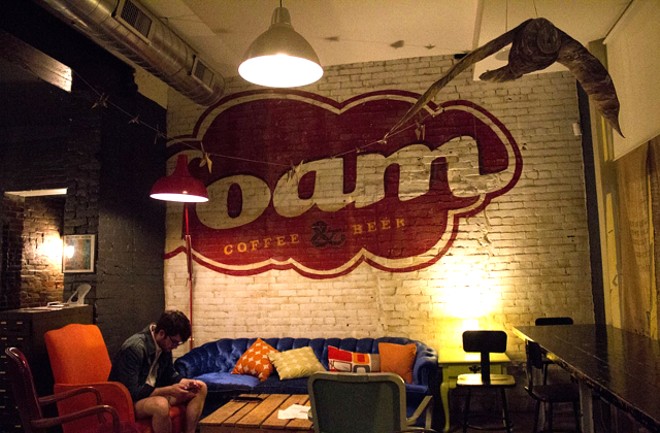 Mabel Suen
Foam has been a destination for live music, coffee and beer on Cherokee Street for a decade.

It's been a brutal week for restaurant and bar closings in St. Louis, and now, a longtime local music venue and cafe has sadly been added to the list.

Originally founded by Mike Glodeck in October 2009, Foam has been operated by Mic Boshans since 2014 (Glodeck still owns the building). When the venue first opened ten years ago, it helped usher in a sea change on Cherokee Street.

"I started working here the first year [Foam] opened," Boshans tells the RFT. "It was the first bar on Cherokee Street; there had been a moratorium on liquor sales and Cherokee couldn't have a bar for the longest time and that was finally lifted and Mike opened the first bar on the strip."

Originally live music wasn't the focus of Foam, but since the space had a stage, customers asked about live music. Boshans, a musician and longtime member of the DIY music scene in St. Louis, asked Glodeck if he could apply his experience and passion for music to booking shows at Foam.

"I started doing a lot more booking and it gained momentum quickly," Boshans says. "After five years, [Glodeck] was ready to throw in the towel and I convinced him to let me give it a go. I purchased the assets and the intellectual property that is Foam and established my own LLC, got my own liquor license and started doing things the way I always wanted to, and it just gained more and more momentum."

The past five years have been filled with ups and downs for Foam. Reflecting on all of the positives, Boshans mentions just a handful of fond memories of shows featuring local and national artists. There was the night that Paul McCartney's son, James, played at the venue, and the evening that Kimya Dawson from the Moldy Peaches hosted a surprise set. On another occasion, now Grammy-award winning band Walk the Moon jumped on stage at Foam during an open mic night after the group's show got cancelled elsewhere in town.

"It's been really surreal to own a venue where I get to host some of my heros, like Phil Elverum of the Microphones and Mount Eerie; Calvin Johnson, who's the head of K Records; and countless others," Boshans says. "It's been so cool to see bands play here and then they're at Stifel [Theatre] opening for Death Cab for Cutie on tour. Foam has always been the spot to see incredible bands just before they're a lot less accessible."

Boshans speaks highly of his current booker, Matt Stuttler, who has been in that position for about four years. Boshans says Stuttler "has been crushing it and booking awesome shows."

"It was cool to be able to make the space what I always wanted it to be — get a proper PA, mount some speakers in the building, make the space more conducive to larger crowds and make sure our shows are promoted on social media and on our website," Boshans says.

The good came with the bad, though, as so it often does for smaller venues and businesses. In January, Boshans launched a GoFundMe campaign in an attempt to shore up funds for the venue. As of this writing almost a year later, the campaign has only raised $12,596 of its $26,000 goal.

Without sufficient funding to continue operations, Boshans announced in August that Foam was for sale. Boshans says that a group of buyers were very motivated to purchase the space but that "a pending property sale offer involving the space in which Foam resides" killed the deal.

Since announcing the venue's closing, Boshans has heard from musicians from across the St. Louis area and beyond. Between today and December 29, Foam is scheduled to host twelve shows — plus possibly one last comedy show — before closing. On December 28, the second-to-last show will feature Origami Angel, Short Fictions, Young Animals and Acid Flashback. The last show will feature Banana Clips, Camp Counselor and other local artists; doors open at 7 p.m. and the show starts at 8 p.m.

"I've had a lot of people reach out," Boshans says. "I've had a bunch of bands reach out about playing. I reached out to one of my favorite local bands, Glued, about playing a show, so they're putting together a bill for [December] 27. Our last show on the 29th we have Banana Clips, which [features] Matt Stuttler, our booker; Ken Thomas, who was our manager for a little while; Ellen Herget, who is a fortune teller at Fortune Teller [Bar]. And then [the band] Camp Counselor, with Mickey [Yacyshyn] at the helm; they were the GM of Foam for a while, so it's going to be a Foam family affair and bill. It's not going to be a business-as-usual show, because it's the last one."

"It's going to be an emotional experience, to say the least," Boshans says. "The reality of the situation hasn't completely sunk in for me yet. It's been a wild ride and an irreplaceable experience for me. And it's been cool to have my own space to do this thing because I know so many bands and I've always enjoyed bringing people together, and really that's all I've been doing — bringing people together, from my staff to the bands and everything. I'm going to relish the next few weeks that we're still operating."

Boshans will be selling all of Foam's equipment and furnishings after December 31.

You can read the message in full below:


Follow Liz Miller on Twitter at @lizzaymillah. We are always hungry for tips and feedback. Email the author at [email protected]