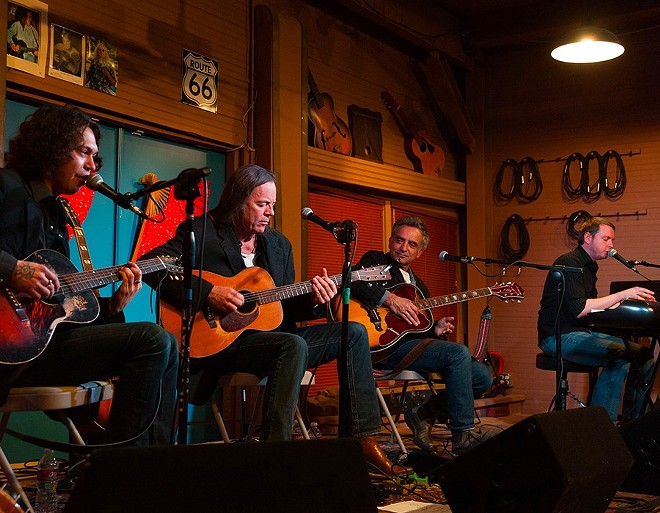 Press photo
There are certain things people do that make you quickly realize they’re dumb as shit. Some guy could huff a bunch of glue, put on mime makeup, take off his pants and storm into his kid’s daycare while adhering to the mime’s code of silence when someone asks him what the hell he’s doing. Or a St. Louisan could skip the Backroad Boys’ gig at the Old Rock House on October 13. That, especially, would be really damn stupid.

If you’ve never heard of the Backroad Boys, that’s because it's a newly formed supergroup of sorts. A quartet, its elder statesmen are Kevin Welch and Michael Fracasso, who helped birth the Americana genre in Nashville and Austin in the early ‘80s. They’ll be joined by Welch’s son, Dustin, a formidable, Austin-based country-rocker in his own right. And then there’s John Fullbright, an Oklahoma farm boy who could get in the ring with Jason Isbell and James McMurtry and hold his own.

Fullbright, an NPR darling known for his vivid lyrics, is more than a singer-songwriter. With the Backroad Boys, he plays keyboards with the aplomb of a fast-fingered organist in a Baptist band, noodling anxiously between tunes.

“You can throw anything at him,” says Dustin Welch of Fullbright. “He’s just a brilliant, brilliant player. One year, at Folk Alliance, he got up and just did an entire set of Oklahoma songwriters — Roger Miller, Hoyt Axton. They were songs he didn’t even realize he knew how to play, and he nailed them. He never ceases to amaze me, the way he retains stuff.”

The Backroad Boys’ name is a self-deprecating spin on that of a woebegone country supergroup, the Highwaymen (Cash, Kristofferson, Waylon, and Willie). During their set at the Rock House, the Boys will play each other’s songs as well as a handful of choice covers (one can only hope they wink at a similarly named boy band made up of supremo douchebags).

But for a whippersnapper like Welch, isn’t it a drag to share a van with his dad as they log long miles in the heartland? Hardly.

“He’s my best friend,” Dustin says of Kevin. “When we’re playing, there really is that genetic thing happening. I don’t even know who’s singing which part, I just know I’ve got my mouth open. We know each other so well that we’re kind of dictating to each other where to go next as we’re playing. It’s kind of like twin language.”