An Evening with Catholic Guilt and its Moonshine-Infused Paint 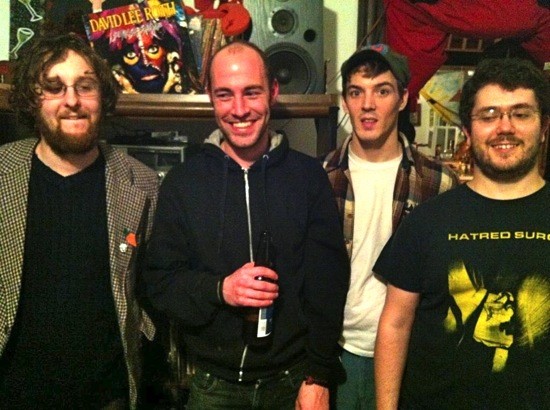 Since 2007, Catholic Guilt's brazen brand of sonic warfare has become a staple in the experimental/noise rock community in St. Louis. Having won the title of the RFT's Best Noise Band of 2011, the band's raw gutter sound continues to emanate from venues all across the South Side area. Comprising the core group of Sean Burk (of Escalade), Joe Stein, and Nick Zengerling (of Maximum Effort and Bug Chaser), the band's constantly evolving take on feedback-laced dirge rock leaves audience with a different set each time.

This weekend sees the result of years of the band's hard work, in the release of their long-awaited debut LP, Beyond Pleasuredome. A rigorous exercise in audial decimation, the record explores the varietal atmospheres of Catholic Guilt's repertoire. With the addition of Shaved Women's Ben Salyers on drums, the current line-up is at its most effective and volatile state.

We caught up with the boys in Catholic Guilt at Sean Burk's Aquarian Magick Happening to talk about its debut LP, songwriting vs. improvisation and the many different trials of the band. Catch them on Saturday evening for their record release with Magic City and Shaved Women at El Lenador (3124 Cherokee Street)

Josh Levi: What are you guys listening to?

Nick Zengerling: I found this really cool record by this African dude, Francis Bebey. It's really cool. It's like thumb harp kind of stuff with almost dance techno beats behind it. And Throbbing Gristle. I've been getting into synth music more and appreciating it.

Sean Burk: I've been listening to a lot of gangster rap and house music. I listened to this really good album by this dude, Paris. A gangster rap album from '91, '92. It's real awesome. He talks about assassinating George Bush and shit. Bush Senior or whatever. It's real foul political hip-hop...some abrasive shit.

Sean Burk: Technically it was me and Joe. Joe showed up, and I hadn't seen Joe since high school. And I was like "Let's Hang out!" and I was like "Let's do a band" or whatever. And I remember Joe said something to the effect that [he] didn't know how to play an instrument and me being like "That's fine." Then Zeng got involved...

Joe Stein: It wasn't whether I wanted to play, or do I know how to play, but if I had instruments. I played piano when I was kid and played trumpet a little bit.

When was that? I remember getting a flyer for an early show with you and Eric Hall at Shangri-La Diner.

Sean Burk: Beginning of 2007 or something.

Nick Zengerling: Where was the first place you guys played?

Joe Stein: Next to the river -- Artica. That was probably our second show that was at Shangri-La.

Nick Zengerling: You guys did 'Discipline' -- They covered Throbbing Gristle...kinda. Weren't your parents there?

Sean Burk: No. That was a different Shangri-La show and I remember I got up from that show. I was finished and I was like "God damn I need a fucking cigarette!!" or some shit like that and I turn around and my mom's hanging out wearing her Christmas sweater and shit and I'm just like "God, fuck!" Fucking bummer.

How did you bring Zeng into the band?

Sean Burk: It's an open door policy with the band for the most part.

Sean Burk: Yeah, but Zeng would come every time we played. It's all really Zeng just being like "I'm in this band now!"

How did you bring Shaved Women's Ben Salyers in to play drums?

Sean Burk: I knew Ben from Webster [University]. We had classes together and he had been to Bonerville a bunch. And I think I asked him.