Photo by Theo Welling
On Saturday afternoon, Charles “Charlie” Berry III stands outside of the Gaslight lounge at the entrance to the Hill, conferring with his family’s attorney Gary Pierson about an important piece of rock & roll history. The question: Will his grandfather Chuck Berry’s red 1960 Gibson ES-345 guitar be on stage that night at LouFest’s “Hail! Hail! Chuck Berry!” tribute set?

“That’s my father and grandmother’s decision,” Berry says. “Even I don’t know where it is.”

Behind us, inside the Gaslight complex, a wrecking crew of local and national musicians are at work at the Chuck Berry catalog; they comprise the backbone of the band that, in a few short hours, will support singers like Huey Lewis, Valerie June and Pokey LaFarge in the tribute. The younger Berry will be there, too, carrying on a family legacy that is now in its third generation.

He’s been playing the guitar for the past ten or eleven years, he says, cutting his teeth on a red Squire Stratocaster. And despite coming from rock royalty, the younger Berry didn’t get started on his grandfather’s greatest hits; his father, Charles Berry Jr., sat down with him and worked out the James Gang’s classic “Funk 49.”

“I didn’t start learning how to play his songs ’til I was fourteen or fifteen,” Berry, now 23, recalls, noting that he learned Chuck Berry songs the way a lot of players did: from a tablature book. The work paid off, eventually: “I played with him at the Pageant three or four times. It was nerve-wracking!”

The rehearsal takes place in the raw open space of Gaslight’s back room, which serves as the fabrication shop for bar owner JB Anderson’s contracting business. So amid hardhats, gang boxes and a fair amount of drywall dust, the musicians set up their amps, guitars and microphones for an afternoon-long rehearsal of the Chuck Berry tribute.

The musicians in the tribute are cleaved neatly in two — the out-of-town talents, and the local players who provide the bulk of the rhythm section and horn arrangements. But those divisions fall quickly to the wayside as the players work through the set. Local pianist Dave Grelle talks shop with Snarky Puppy keyboardist Cory Henry, who is showing off his “harpejji,” a hybrid instrument that marries a lap steel guitar and a zither. During lunch break, bassist Chris Chew of the North Mississippi All-Stars sits with horn players Ben Reece and Adam Hucke and talks about the rigors of the road. Guitarist and music director Eric Krasno, formerly of Soulive and currently of funk powerhouse Lettuce, discusses some setlist-order tweaks with drummer Kevin Bowers, who is tasked with corralling the local players and who will ultimately emcee the evening from his drum stool.

It is a fluid scene as musicians, friends of the band and a few looky-loos pop their heads into the rehearsal space; anyone who happens to stop in for lunch at the adjacent outpost of Cha Cha Chow can hear the proceedings through a propped-open side door. The energy intensifies as the band Spoon pops into Gaslight for a three-song, stripped-down set hosted by ALT 104.9 FM; singer Britt Daniel and keyboardist/guitarist Alex Fischel play three songs from this year’s Hot Thoughts in Gaslight’s glassed-in studio as fans watch from the bar, then quickly decamp to the rehearsal space to run through Berry’s “Come On” with the band.

As he stands on the sidewalk for a quick cigarette, guitarist and singer Mike Aguirre says that he usually doesn’t play Chuck Berry’s songs in his regular sets at clubs like Beale on Broadway — too many people play them the wrong way, he says. But he jumped at the chance to perform in the tribute, and during rehearsals he serves as the vocal understudy for Huey Lewis and Pokey LaFarge; come showtime, Aguirre kicks off the set with “School Days,” leading the crowd in the fist-pumping shout of one of Berry’s most enduring slogans: “Hail, hail rock & roll!” 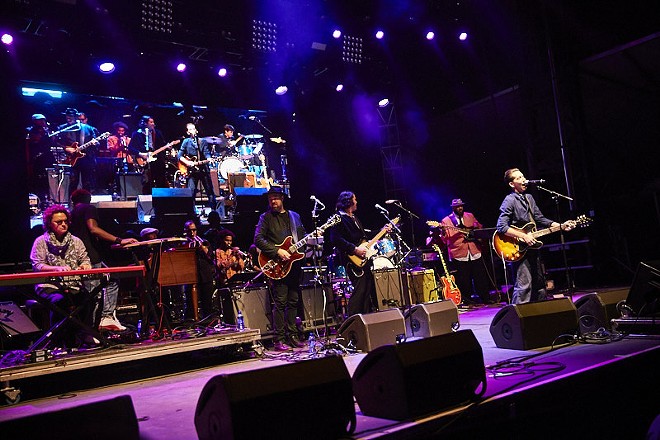 Photo by Theo Welling
Hail! Hail! Chuck Berry performing at LouFest. See more photos in our slideshow.
The LouFest set itself is, like most of Berry’s best-known songs, brisk, effervescent and a lot of fun. After Aguirre’s opening salvo, LaFarge comes out for “Maybellene” and a fiery “You Never Can Tell” that benefits from some New Orleans punch, compliments of the Funky Butt Brass Band's horns. It is only slightly odd that no one mentions Chuck Berry or his passing this past March overtly until Huey Lewis, who notes that Berry was “the first guy to ever write songs for kids.” Perhaps the musicians knew that the songs could speak for themselves and sing Berry’s praise more succinctly.

Charlie Berry III joins the band for the last three songs, taking a solo and doing the night’s best interpretation of his grandfather’s famous Duck Walk. And, as it turns out, that red 1960 Gibson ES-345 does, indeed, show up; Charles Berry Jr. plays it during the last song, “Johnny B. Goode,” but not before noting the instrument’s many travels at home and abroad. During the end-of-show bow, Berry Jr. holds it out like a totem, mimicking the many poses his father made with the guitar.

Without that instrument and the man who used it to write rock & roll’s first draft, it’s hard to imagine the music that filled two days of LouFest coming into existence.