An Open Letter to Metallica Regarding Death Magnetic Friday

Metallica released its ninth studio album today, five years after the release of its last album, St. Anger. I want to believe, but I’ve been disappointed by the last, oh, five albums and seventeen years. But it’s Death Magnetic Friday, according to Metallica, and I can’t help but be excited.

My Qualifications: Bought Ride the Lightning on cassette upon its release in 1984. Have purchased every Metallica album in the intervening twenty-odd years, except for S&M because it was obviously horseshit from the get-go. Threw away Load and Re-Load, burned a copy of Garage, Inc. just to piss Lars off, held on to St. Anger because there seemed to be something happening that was different for post-Cliff Metallica -- maybe promise?

Preparations for Death Magnetic Friday: Listened to Kill ‘Em All, Ride the Lightning, Master of Puppets, ...And Justice for All and St. Anger this past week at work (really regretted that last one). Bought a DVD/VCR combo so I could watch Cliff 'Em All and A Year and a Half in the Life of Metallica parts 1 & 2 on VHS again, along with the Seattle show from Live Shit box set. I haven’t been this excited for a Metallica album since the self-titled black album, and that didn’t turn out so well. I vacillated over that one for months, to the point where I couldn’t make myself listen to it again. Watched all the illegal live clips of new songs on YouTube yesterday. The first four minutes of "The Day That Never Comes" have me very apprehensive about this album; too mellow, too consumer friendly. But the second half of the song is kick-ass, so I maintain my optimism.

Purchased Death Magnetic at 12:06 p.m. CST at Vintage Vinyl. I opted for the die-cut cover edition, because I didn't want to read the lyrics anyway. (They're obliterated by the cut-out on most pages. S-M-R-T, James).

74:46 is just too long for an album. I bet at least one of these songs could be jettisoned, along with the first half of "The Day That Never Comes." I hope that’s as bad as it gets. 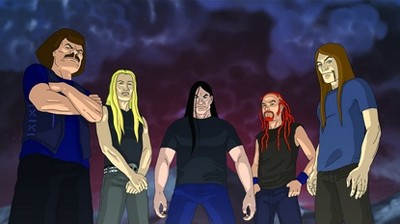 How I’m feeling right now, ten minutes into the album: Like tearing the head off of a high school guidance counselor so I can shout "Fuck my future!" down his neck-stump to hear it echo in his chest cavity. Like I'm gonna have to break that glass wall on the managing editor's office with my head. LIKE I AM FUCKING ABLAZE WITH WHISKEY AND PLAYING RHYTHM GUITAR FOR DETHKLOK.

First three tracks "That Was Just Your Life," "The End of The Line" and "Broken, Beat and Scarred" are floorpunchers. There is thrash post-1991 in these boys, and I’m honestly shocked. Rick Rubin’s done a Flemming Rasmussen-like job on the guitars, they're dry and crystalline in the mix, but the whole sound is big and organic. That makes no sense whatsoever, I know. But there's a monumental feel to the guitars, but they’re not super-saturated, like they’ve been ProTooled to death. I think new bassist Rob Trujillo is a large part of this organic depth. The riffs are chopping, time changes keep spinning off into new riffs that sound like old friends. It’s not like James and Kirk are re-hashing old ideas, but more like they’ve spent some time trying to figure out how the old songs worked when they didn’t have ProTools to do their thinking. These songs have multiple sections, but nothing feels grafted on in post-production – it's all supposed to be there.

"All Nightmare Long," fuck, that’s a classic ‘TalliRiff to open that sucker. Clean single notes wobble out the intro, then in comes the precision downstroke chukka-chukk on guitar/bass tandem before Lars punches in with the tom-smash countdown to the actual meat of the song. It's fun, and I can't remember a fun Metallica riff from the last ten years, maybe longer (Fuck you, I liked "Frantic.")

Lars, we’ve had our differences, you and I. I hated your last couple albums, but I never hated you. There wasn't much of you in some of those drums to hate, though, if I'm being honest. But not anymore. Tell me, how did you sneak your whole kit into the office without me noticing – or does it only sound like you did that? Shit, you owe Rubin a coke for the work he's done bringing your sound back. And James still has some bark in his voice too, which adds that extra snarl that's been missing. There's about four time sigs in this one in the first four minutes – this could have been an outtake from ...And Justice For All. There's something in that second-to-last Kirk solo that's downright eerie. That howling tone he used to pull out of his epic solos (think "Call of Ktulu" or "For Whom the Bell Tolls"), that’s back. Half wah-induced, half finger vibrato, half fucking banshee wail – look, I know that"s three halves, but I said it was epic and it’s goddamn epic.

We’re up to "Cyanide" now, which I’d heard on YouTube. The album edition of this song is much better. We're past the halfway point in this album, and other than the first four minutes of "The Day That Never Came," I'm still stoked on it. I know James has quit drinking, but I feel like I'm ripped to the tits on gasoline. This is my old Metallica.

And yeah, I’m gonna say it: Jason Newsted, you’re not missed. I liked your playing with the band, and I liked your album with Voivod, and if we met I’d probably like you. But holy Geezer Butler, does Robert Trujillo’s bass work fit this band better than yours ever did. I can’t believe how much better the whole sound is – he’s throwing out some monster-deep thud, and it’s as vital to a great Metallica as Kirk’s bats-in-the-belfry solos.

FUCK. ME. "The Unforgiven III" just kicked in. Why is this song a franchise? You know who uses Roman numerals on songs? Douchebags. I don’t care how many teenage boys are gonna fingerbang girls this weekend to this sensitive piano-and-cello interlude, you are FUCKING MELLOWING MY HARSH WITH THIS BULLSHIT, METALLICA. Seven-minutes, forty-seconds of this garf. I’m at half-mast, boys. You better bloodrocute my nuts with this next song, I swear . . .

"The Judas Kiss." OK, this is alarming. No complaints about the guitar on this, but the whole song has the stink of the "Fuel"/"I Disappear" period. There's maybe too much groove on this thing, a little radio-ready melody and no real fury. It's like they wrote a theme song for Hot Topic. I'm still optimistic, because this is only two-and-a-half clunkers out of eight so far, and that’s a winning percentage, especially considering Metallica’s recent history. But we’re at seven minutes on this one, and I’m over it.

"Suicide & Redemption." CHA! Listen to that bulldozer bass riffage! I want to fuck a black hole to that. GRRRR, those guitars are tearing one off. That's a hook so nice it really does need to be played thrice. Picture a sea of Metallibangers throwing up the horns and slinging skull to this song and the summer tour becomes the hottest ticket out there. This is ri-goddamn-diculous. Where has this Metallica been for the past couple years? Get Leonard Nimoy to go in search of . . . aw, big soaring clean guitar notes just turned into a massive new riff. This is the instrumental for the album apparently. I may have blacked out I’m so fucking happy. At 6:18, of this song, I declare Metallica off of life support THAT SOLO JUST WRECKED MY TROUSERS. STEVE VAI, CHOKE ON KIRK HAMMETT’S SACK! YOU CHOKE ON IT, SIRRAH! This is madness. Metallica may have to hire a special attorney to handle all the neck breakage claims. If this last song is an afterburner like "Damage, Inc." I'm gonna crap a baby donkey, eat it and then crap a baby donkey that can play guitar.

"My Apocalypse" Golf clap. Well done. I'm legally changing my name to Phantom Lord. I am buying back my '78 Camaro with the T-tops. I'm dubbing this album onto cassette. I'm going to cruise around the county tonight blasting this album at unsafe volume while throwing Big Gulp cups full of Everclear out of the car at every stop light. I'm not mowing your lawn tomorrow old man, I'm getting wrecked and then heading to the 7-11 to hassle people in the parking lot for spare change. I AM BACK IN YOUR CORNER, METALLICA, LIKE A SURLY TEENAGER WITH NOTHING ELSE TO DO BUT CHANT YOUR NAME AND CRANK THIS ALBUM UNTIL SOMEBODY PUNCHES ME OUT.