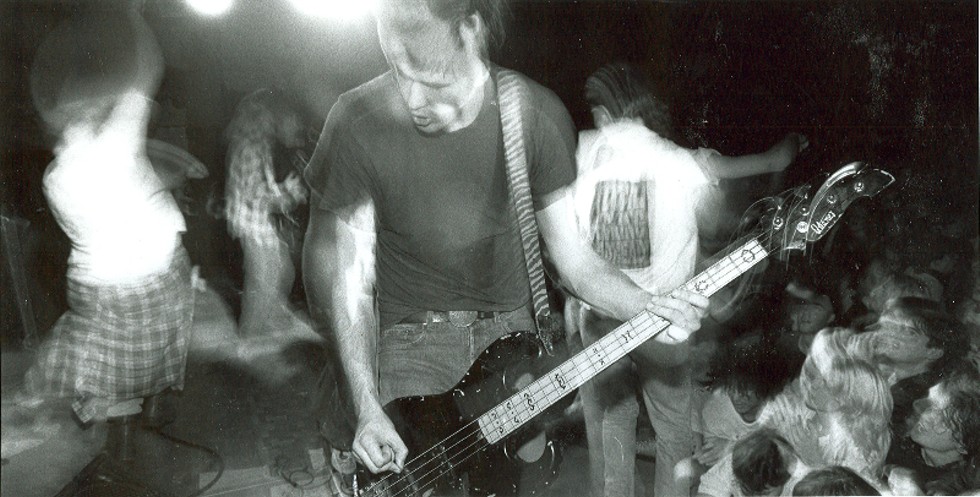 VIA SUB POP
This photo is not from the night in question — proper documentation of Nirvana's Mississippi Nights show has largely been lost over the years — but it's an apt visual from the same era.

Thirty years ago, on October 16, 1991, Nirvana played its first and only St. Louis gig at the beloved and now-bygone venue Mississippi Nights. It was a clear and cool autumn Wednesday when the trio of Kurt Cobain, Krist Novoselic and Dave Grohl pulled into the late, famous Landing night club. The band was in the middle of a massive metamorphosis from underground punkers to generation-defining, international superstars; its landmark album Nevermind had been released 22 days earlier on September 24, 1991, by major label DGC Records, and the accompanying music video for its first single, “Smells Like Teen Spirit,” had premiered as a “Buzz Bin” clip on MTV’s late night alternative video show 120 Minutes just seventeen days prior on September 29. The group’s unexpected ascension to a garish grunge commodity was as close to a viral sensation as anything got in the time before dial-up internet, largely due to “Teen Spirit” almost immediately leaving the “Buzz Bin” and landing in continuous rotation on MTV. In this short period, which was less than a month from the album’s release and the tour stop in St. Louis, the relatively small 1,000-capacity venue was completely oversold (tickets cost between $8 and $10 dollars!), and anticipation was at a fever pitch for Seattle’s greatest flannel-clad exports to play their debut gig in the river city.

What happened that night has gone down in St. Louis history as one of those legendary gigs, a show that now everyone claims to have attended but only a lucky few actually witnessed. From the start, the crowd erupted into a cacophony of blood, sweat and passion as slam-dancers and crowd-surfers ransacked the pit, stopping the gig more than five times before Cobain got frustrated or inspired (perhaps both) and invited the whole audience onto the stage mid-show.

Naturally, the crowd enthusiastically complied, with chaotic results. Gear was stolen. The fire marshal was called. Grohl booked it backstage and giddily watched as anarchy engulfed his fellow bandmates, who were pinned to the walls with their instruments, and a near-riot broke out.

School-yard legend among '90s stoners about the gig alleged that Cobain wanted to cause a stir that would rival Guns N’ Roses’ infamous “Riverport Riot.” A few months earlier, on July 2, 1991, Axl Rose had stormed off stage after attacking a fan who was taking pictures of the band and pouted, “Well, thanks to the lame-ass security, I’m going home!” An actual three-hour riot ensued, with dozens of injuries, as intoxicated fans angry about Rose’s early departure attempted to rip seats out of the then less-than-a-month-old amphitheater in Maryland Heights. Though the rivalry between Nirvana and Guns N’ Roses was very real in the early '90s and is used by many rock historians as a way of describing the cultural shift from the days of hair-metal dominance to the Nevermind era, this was likely not on the minds of the Nirvana crowd. Novoselic even allegedly pleaded that night with the audience, saying, “Don’t be like the GnR crowd, because shit attracts flies.” The fervor at Mississippi Nights was more spontaneous, with a crowd simply elated by a fleeting few hours of raucous rock & roll and the opportunity to see a band at the peak of its performance in a venue the size of which it would likely never play again.

The Riverfront Times spoke with some of the lucky few who were there that night in a series of one-on-one interviews to build an oral history of the chaotic show.

Pat Hagin, booking agent for Mississippi Nights, current owner of the Pageant and Delmar Hall: I booked the show. In those days, it was probably [booked] six weeks to eight weeks before the show. We booked [Nirvana] before we had any idea about the band.

Rob Wagoner, Ultraman and Bent, Euclid Records: When Bleach came out it wasn’t really my thing. I knew a lot of people who liked them a lot. Ultraman was in Munich playing on September 24 when Nevermind came out. We were in the club in the daytime and they were playing it. I remember thinking, “Wow, is this the same band?” And the kid from Scream was on drums.

Matt Harnish, Bunnygrunt, Matt Harnish’s Pink Guitar, Vintage Vinyl: I had heard “Smells Like Teen Spirit” on Tony & Cat’s radio show on KDHX, "The Groove Machine," on Saturday nights. That was the only song I had heard by [Nirvana].

Eric Eyster, Hell Night: I remember it was particularly exciting because they'd never played St. Louis before. Their buzz was strong though, because the show was sold out at Mississippi Nights. My friends and I had already heard most of Nevermind because of all the bootleg recordings of the demos that were floating around. Most of us already knew the songs, we just didn't know a lot of their correct titles.

Hagin: The guest list might have been huge because everyone was crawling out of the woodwork trying to go to that show. There could have been another hundred people in there just from various record stores, newspapers, fan-zines.

Roberta Patterson, former KCOU music director: In 1991, I was a music director at KCOU in Columbia, Missouri. The station was an early supporter of grunge and other alternative music, and we had played Bleach. When Nevermind came out, I remember writing the album review for the station. Since the station was so supportive, the DGC college radio rep hooked me up with tickets and my roommates and I were going to drive to STL for the show.

Thomas Crone, former Riverfront Times music writer: I was really, really lucky because I was covering music for the RFT, so my ticket was comped. I certainly would have paid for a ticket. I absolutely wanted to see them. I think a lot of people at the time felt like Urge Overkill was the better band. I never quite found my clique as a fan of Urge Overkill. For me it was 100 percent a Nirvana concert. 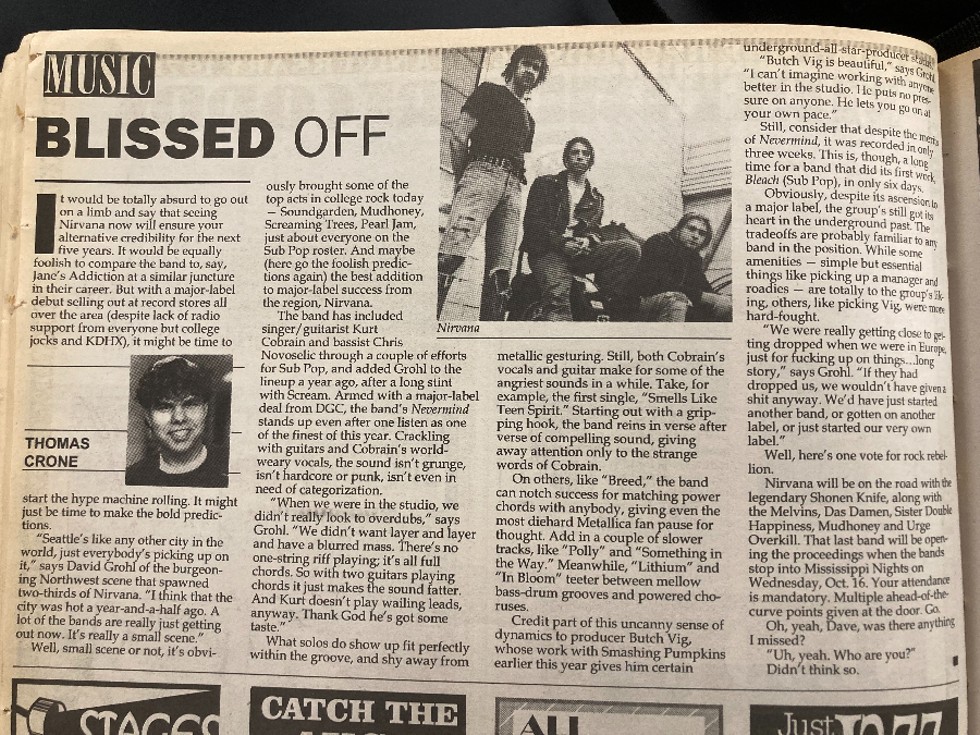 VIA RFT ARCHIVES
Thomas Crone's preview for the show, from the Riverfront Times archives.

Harnish: Probably the reason I was at the show was because my roommate was a big Urge Overkill fan. I was in college. I was DJing at KSLU. Mississippi Nights was kind enough to give us free tickets to almost every show to give away, but we had essentially zero listenership. It was pretty much always the DJs that went to the shows.

Jim Utz, former Vintage Vinyl employee: The night before I went to Columbia, Missouri, to see the Meat Puppets and Urge Overkill play at the Blue Note. We’re hanging out after the show at the Blue Note, and Urge Overkill was just hanging out too. I was talking to them. I told them I was going to see them tomorrow night with Nirvana. They asked if there were cool places to shop [in St. Louis] for vintage clothes. I told them about Haberdashery and Hullabaloo. We exchanged numbers. I drove back to St. Louis and went to work the next day at Vintage Vinyl and they called me at work. They told me [Hullabaloo was] great. So they said, “Thanks, we’re going to leave tickets for you at the door.”

Patterson: Urge Overkill played a warm-up show at the Blue Note. We were big fans, and the band came by KCOU and did an interview before the show.
As it turns out, UO left the Blue Note without a guitar, a bunch of tools and a sweater. When they got to STL, they went by Vintage Vinyl. That is where Jim Utz had spoken to them, and they asked him if he knew anyone in Columbia that could get the things and bring them to the show. Jim knew I was driving in and put them in contact with me. I was able to pick up the things and deliver them to Mississippi Nights. I remember walking up with the guitar and the other things and there were loads of people all around the club. Since I already had tickets, UO gave me and my friends backstage all-access passes for our trouble.

Wagoner: During Urge Overkill you could freely walk around and not bump into anybody. I remember when Urge Overkill played, Grohl was standing on the first riser by himself and nobody was paying him any attention. We knew him from when he was in Scream, so we went up and talked to him for a while.

Utz: I get to the door that night, and Urge Overkill put my name on the guest list and gave me some backstage passes. When Urge Overkill finished their set, I went backstage. Between bands, I’m back there hanging out with Urge Overkill and they said “Hey, why don’t you watch with us from the side of the stage.” I’m like, “Cool!” 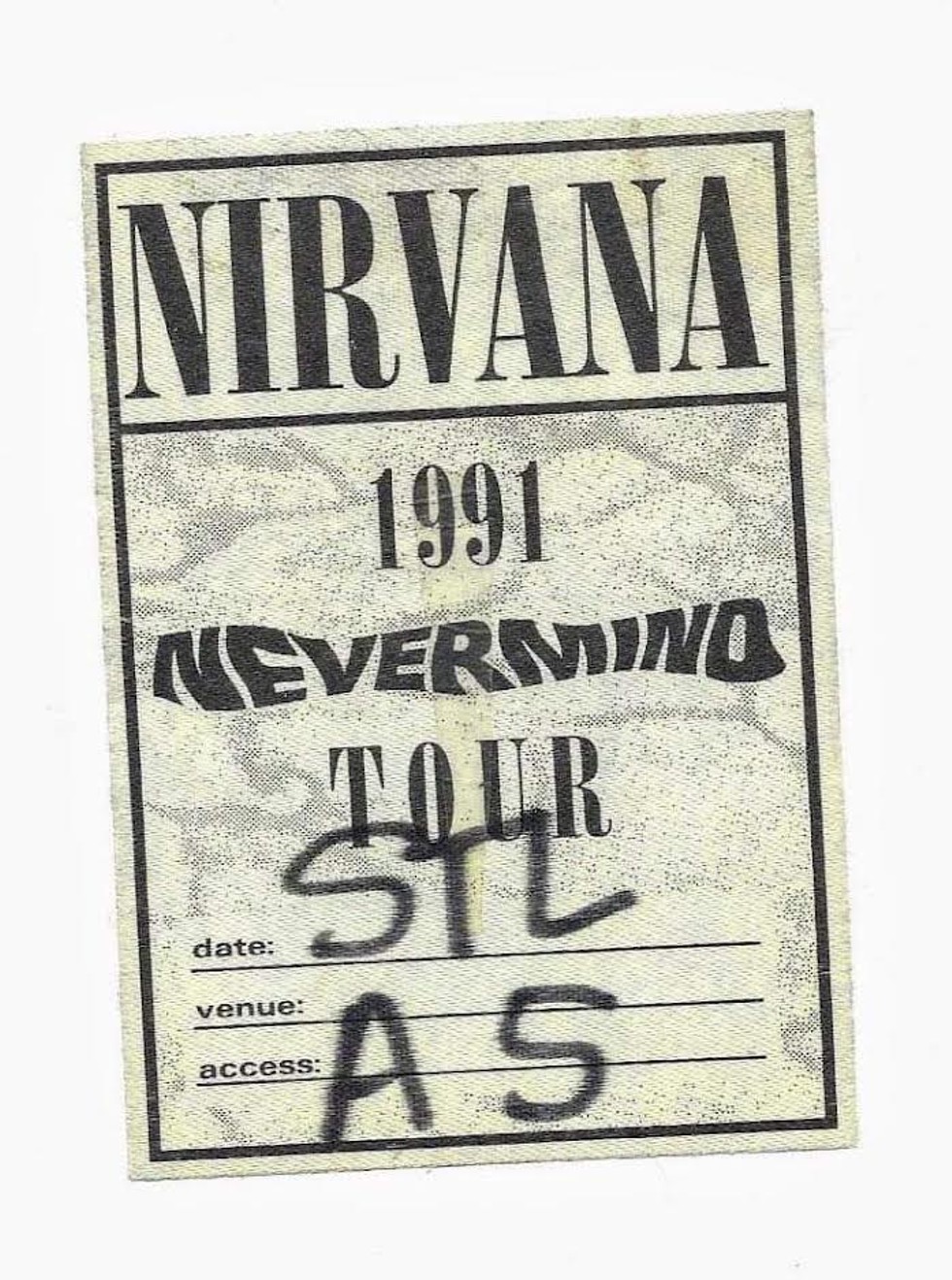 VIA JIM UTZ
A backstage pass from the show.

Crone: The lights guy invited me into the light booth, which was all the way at the back of the club and up a small flight of steps. I remember it was so crowded. He saw me and fished me out. I watched both bands from the sound booth, which gave me this outrageously cool ability to see as it all started to break down. From that vantage point it was quite a thing to see.

Eyster: By the time the lights went out for Nirvana, the place was ready. I was jam-packed in the very front, knowing full well I would soon be feeling crushed. Everyone was hypnotized by Nirvana's opening song, “Jesus Doesn’t Want Me for a Sunbeam.”

Crone: I think everyone in the room felt like they were there for something special. The room was really alive, in the sense of, like, electric. It seemed like there was a lot of chaos happening in front of the stage, spilling onto the stage.

Hagin: I went down that night and ended up sitting in the office talking to the owner. Urge Overkill plays. Set break. Then Nirvana goes onstage. I was still talking to the owner, but I was listening out of one ear to the show, and I could pick up [that] something wasn’t going right by what I could hear from the stage.