An Under Cover Weekend 2014 a Huge Success, Of Course: Photos 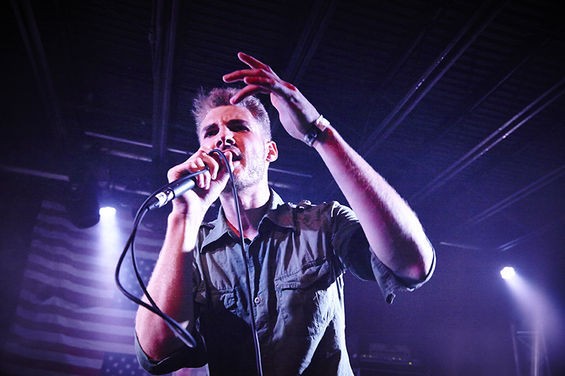 Every year for An Under Cover Weekend, Mike Tomko and Mike Cracchiolo throw together two nights of exceptional local bands that pay tribute to their favorite nationally known acts at the Firebird. Well, "throw together" isn't quite right, considering that the event takes more than eight months of planning, auditioning and booking bands, putting together an extensive information-leak calendar and running everything behind the scenes when it's showtime.

The duo has done this for eight years running, building up one of the city's most anticipated tribute-band festivals and also offering music lovers a taste of St. Louis' rich talent. Each year's event is special in its own way, but the 2014 festival proved especially memorable, with Volcanoes' night one Rage Against the Machine set naturally lending itself to thoughts of Ferguson, and night two's entire show happening at the same time as the continued unrest there.

See also: - Photos: Night One of An Under Cover Weekend 8 at the Firebird - In Defense of Tribute Shows

We sent photographer Steve Truesdell to night one of An Under Cover Weekend on September 26, and among a ton of excellent shots, he nabbed these eleven beauties of Volcanoes as RATM, Bear Hive as LCD Soundsystem, Search Parties as Hall & Oates, Al Holliday & the East Side Rhythm Band as Joe Cocker, and Brother Lee & the Leather Jackals as Elvis Presley.

And though we don't have photos, night two of the festival was just as memorable, with Various Hands headlining as Red Hot Chili Peppers, Blackwater 64 as Foo Fighters, Bluefish as Rihanna, Hidden Lakes as the Cure, and Brother Mouzone as the Flaming Lips.

Steve Truesdell
This guitar is total dedication to the set. Volcanoes as Rage Against the Machine. See more photos here.

Steve Truesdell
This is the kind of behavior that got Elvis' pelvis banned from TV in the 1950s. Brother Lee & the Leather Jackals as Elvis Presley. See more photos here.

Continue to page two for more photos of the event.