Andrew McMahon of Something Corporate Talks Its Reunion, the Future and If It'll Influence Jack's Mannequin 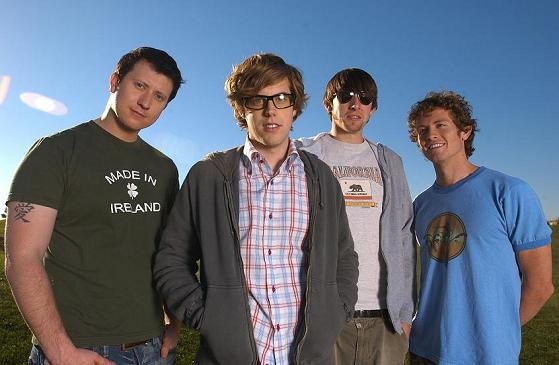 Something Corporate, back in the day

During Something Corporate's original time as a band -- roughly the years between 1998 and 2004 -- it never received its proper due. The piano-driven group didn't quite fit in with prevailing trends (although it was on then-pop-punk mecca Drive-Thru Records and toured with bands in the genre) and vocalist/ivory-tickler Andrew McMahon's lyrics were wise beyond his years. "I Woke Up in a Car" distilled road-borne homesickness, and the sugary pogo "Punk Rock Princess" should have been a soundtrack staple of every teen movie released a decade ago. But in the time since SoCo took a break, McMahon found greater fame with Jack's Mannequin -- and anticipation for a reunion continued to grow. In late 2009, the band announced reunion shows; a greatest-hits album, Played in Space: The Best of Something Corporate, and nationwide tour dates have followed. On Monday, the day SoCo started the tour, we caught up with vocalist/pianist Andrew McMahon in Minneapolis. The band's St. Louis show is tonight at the Pageant; tickets are $27.50.

Are you nervous [about the first night of the tour]? I'm pretty nervous. [laughs] We just had a little yoga session back here, which sort of helped calm the nerves a little bit, chilled me out for a minute. I'm feeling a little more grounded than I did when I woke up this morning. We'll see how it goes, I'm pretty excited.

You've played these songs before, you've been in front of people. Why are you nervous for tonight? Not everybody knows this about me, but I get nervous before I work in pretty much any band - any tour, any show. I carry nerves with me all day, I have my program I run through the day to just keep 'em in check and keep fluid. This is sort of momentous for all of us, to be out here. Obviously we've done some shows now, but we're starting a tour for the first time in five years or so. It's exciting, but yeah, it brings the butterflies for sure.

What made 2010 the right time for you guys to start doing shows again? In a lot of ways, it was going to be the only time we could do it. We were all in such a good place with one another, and Universal was putting out the best of ... It just seemed like, in that strange way that the universe conspires towards a goal, it just kind of all came together. Josh [Partington] our guitar player has been in the grips of an MBA and law program concurrently, and he works and is in school a ton. Obviously I've been doing the Jack's Mannequin thing, and everybody's got their hands in something else. We realized this summer was going to be the one moment that it looked like all of our schedules were going to clear out enough to make something happen. We thought we'd take the moment and do it.

This time around, now that you're five years older, what's been the biggest difference for you guys? The big thing is that there isn't the pressure of a career on this per se. It's more just a celebration of the career that we had. There aren't really many arguments to have. It's like, 'Hey, do you wanna go rock for a month? These are the venues, let's go do it.' There's not a whole lot of seriousness around this, other than the fact that we want to go out and do right by our fans and do right by the work that we put in for so many years before this moment -- and show that we've grown quite a bit and play a good rock show for everybody.

Are there any songs you guys decided you wouldn't or couldn't do on the tour? Not really. We focused in on 23, 24 songs just because the reality of how much we could bite off. We only shied away from stuff that never struck us as fan favorites. The whole point of this tour - we're not coming out here trying to be experimental. We're trying to play the songs that people grew to love Something Corproate for. We made a list the top 23 or 24 tunes we felt like really had an impact and reached the most people and we hear the most about, and just practiced them and played them.