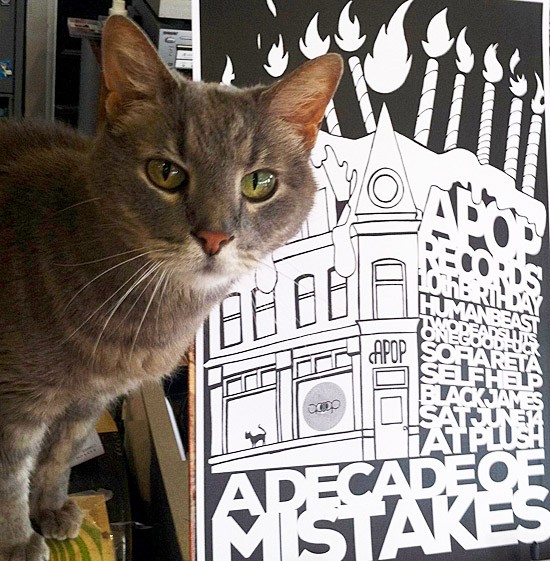 Before the advent of Record Store Day, Apop Records had a birthday celebration every April, and for good reason. Having a storefront focused solely on fringe art is a bold move, and not a particularly smart business decision. But that doesn't deter owner Tiffany Minx. She has built a hub for creative minds and music lovers a like - a place to explore subversive sounds.

With the recent rise of Record Store Day, Minx moved Apop's birthday party from April to June so she could focus on the show without the added pressure from a national consumer holiday. Apop celebrates ten years in business this Saturday, June 14 at Plush Saint Louis with a stacked cast of live acts from near and far.

"I think that Apop Records connects to a lot of different music scenes. When we've thrown parties or bigger shows, we've pulled all kinds of people from different groups or walks of life. It's a really good combination of people," says Minx.

Apop started in 2004 at a small downtown space in Columbia, Missouri. While dealing with high rent and the high turnover of customers, a product of a transient college community, Minx and her former partner Dustin Newman saw fit to move. By 2007 Apop had relocated to a spacious storefront at the corner of Cherokee Street and Iowa Avenue.

"Columbia felt like it only had so much room for growth. If it's not something based around the Universities there or the few industries there, it's going to be pretty small. We just wanted to move to a bigger city with a bigger population involved with the arts and music," Minx adds. While Cherokee has become a home for many new bars and hang-outs, Apop's move preceded the street's rise as a center for art and music in St. Louis.

"We wanted to go somewhere where we could grow out business a little more and have more opportunities. We were able to get a lot more space than what we had. We did a lot of crazy things and neighbors and people living around the street were cool with it," Minx says.

Retail remains a challenge for Minx and other specialty shop owners. Cherokee's nightlife is exploding, but that bears little growth for daytime stores like Apop. Despite the rough road ahead, Minx still prefers the path less traveled:

"We dabble in mainstream and indie things, but that's not really our bread and butter. I don't want to change what I really do at the store. If I do that, I'm going to turn off a lot of people coming in, looking for fringe or off-beat things. I don't really want to sell that out. Otherwise, I might as well sell anything else," Minx says.

The storefront is an important place - it represents a convergence of niche interests. A defiance to mass-market media might not be Minx's endgame, but Apop remains a local fixture and that's reason enough to celebrate another year in business.