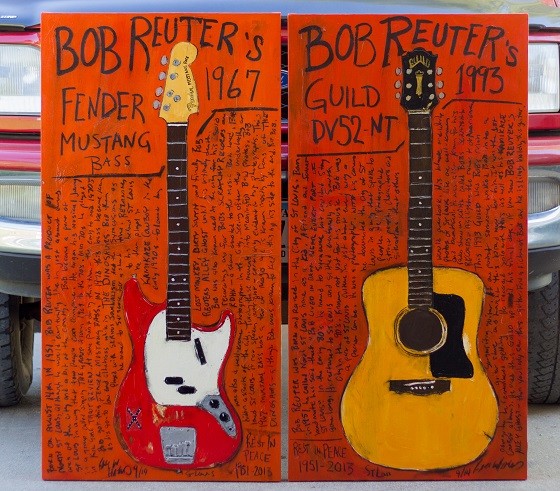 Karl Haglund is just such an artist. A painter from Charles City, Iowa, Haglund grew up with creative parents, forging his own paths through both music and craftsmanship. As an adult, though, Haglund has managed to merge his interests, painting extremely detailed guitars and sharing musicians' stories of what makes these instruments so personal and special.

"I see an old guitar that's beat up, and I think of it as a work of art instead of just an instrument," Haglund tells RFT Music. "I see the guitar as its own piece of art in itself."

In this week's music feature, Haglund explains how he got into this specific type of art and why it's meant so much to him. Estimating that he's painted 140 to 150 guitars, Haglund has immortalized the famous axes of Billy Bragg, Jay Farrar, Jeff Beck and many more. He'll paint just about anything, no matter if it's for a musician or for an art lover. But the man does have some standards.

Below, Haglund shares with RFT Music a few stories behind some of the more famous guitars he's painted, as well as for the St. Louis guitars represented in his October 11 exhibit, Fifteen Keys: The Guitars of St. Louis, which takes place at the Stage at KDHX (3524 Washington Avenue). Tickets are $5.

Haglund's favorite band is Centro-matic, the Texas outfit fronted by Will Johnson. A guitarist himself, Haglund struck up a friendship with Johnson, whose own art later inspired Haglund's work.

Will Johnson creates baseball paintings. He also has this water tank custom guitar built by Creston Lea in Vermont, and these are really cool guitars made from an old stave off a train, hence the name. So I'm looking at Will's art one day -- how he does the baseball player with the bio and the history -- and I thought it would be cool to do. At the time, I thought, "Well, I'll just do Will's guitar like this," because I'm pretty much a Centro-matic nerd of the highest order. I painted the guitar and pretty much took the story straight off the website; this was just going to sit in my basement like a lot of my other artwork. But then I decided to contact Will's manager to see if Will would like the painting. I ended up just giving it to Will, and it hangs in his house. That was really the start. I thought, "Will really liked this," and I respected his musicianship and his art. His art has a lot of soul, which is something I always go for -- I hope that my art has more soul than anything else. So it just was an affirmation for me.

As Haglund painted more and more guitars on canvas, word began to spread. You know you've made it when Billy Bragg asks you to replicate a beloved instrument through paint.

The Billy Bragg one, I did that as a commission for him. When he played St. Louis last year, he did an in-store at Vintage Vinyl. He saw my prints hanging up there and sent me an email the next day. That's one of those emails you get where you try not to use the F-word -- you're so excited, but your kids are in the room and you try to come up with alternative ways to express your joy.