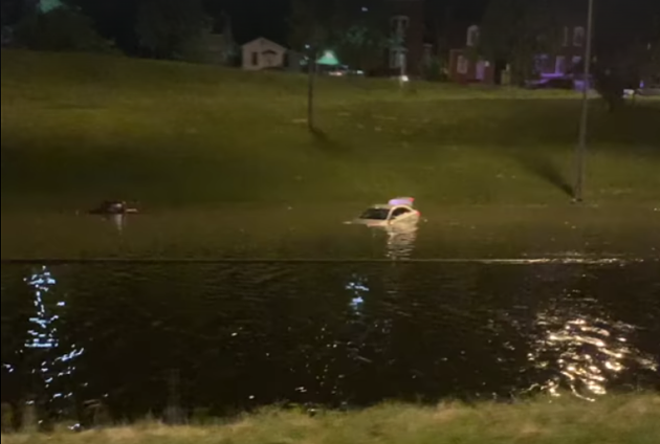 SCREENSHOT FROM THE VIDEO BELOW

It seems apparent at this point that Missourians are feeling the wrath of a vengeful god.

It's unclear what, precisely, we've done to incur said wrath (he's probably a Sharks fan, if we had to guess), but the Show Me State has been absolutely pummeled with extreme weather in recent days, exacerbating an extra-rainy spring that had already resulted in widespread flash-flooding across the St. Louis region and beyond.

The situation has been so dire, in fact, that Governor Mike Parson declared a state of emergency on Tuesday. (And that was even before a tornado decimated large swaths of Jefferson City.)

Now, a viral video shot by St. Louis rapper Nick Menn is drawing the severity of the situation into focus for St. Louisans on the south side, with the surreal sight of I-55 completely submerged and dotted with stranded, flooded vehicles.

Menn shot the video early this morning, at about 4:30 a.m. at the Loughborough exit on I-55. He was heading home in the southbound lanes after pulling a late-nighter at a local recording studio when he came upon the scene. The video shows the northbound lanes entirely submerged. It's since been shared more than 3,000 times.

"I beat the cops barely to the flood," Menn tells RFT. "They hadn’t shut it down yet going south, so good thing a few people were paying attention.

"Luckily the rain just slowed up," he adds. "'Cause if it was still storming as bad as it was ten minutes prior, people wouldn’t have seen it."

As it happens, Menn caught a video of that downpour too — as well as footage of a southside sewer erupting like a geyser in the middle of the street (!).

According to Fox 2, both directions of I-55 were closed down at the Loughborough exit from around the time of Menn's video until 6 a.m. Tow trucks were used to clear vehicles off the flooded road, and stranded motorists could even be heard calling for inflatable boats.

In all, it seems to match the M.O. of the kind of guy who would flood the entire Earth to punish his creation for its sins. Whatever we did, dear Lord, we're sorry.

Unless this is about the Sharks. Definitely not sorry about that one.