Bagheera Alive and Kicking -- In Their Basement and on Facebook 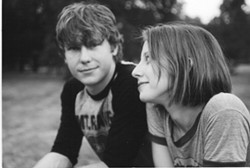 In August 2005, Bagheera -- the sweet-and-sour indie-fuzz band formed by the husband-wife team of Heather and Theodore Moll -- announced a performing hiatus due to the arrival of their first child. That break has lasted beyond the intended spring 2006 return, but in recent weeks a Bagheera Facebook page sprouted, complete with new music. Ted Moll tells me that the band is recording two albums(!) of new material in their home studio, although due to other factors -- kids and basement remodeling -- things are slow-going.

"We're taking our time and working on one part here and one part there as time allows," he wrote in an email. "In some ways, it gives us a lot of perspective on the project as a whole. We can really step back and see how everything is fitting together. It definitely gives us more critical listening time, which sometimes is compromised in a rushed studio situation."

Exciting, either way! The new tunes are crisp and hooky -- just what you'd expect and want from the band.