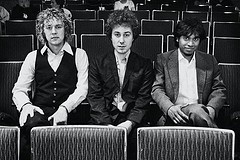 If you weren't already heading to Off Broadway (3509 Lemp Avenue, 314-773-3363) tomorrow night for JC Brooks and the Uptown Sound, you oughta be. The soul-steeped Chicago band brings along another Windy City export, a stellar three-piece called Bailiff. You can't go wrong with a blues-rock band that weirds up where Black Keys leave off.The two principals in the band are Josh Siegel and Ren Mathew, singer-guitarist and drummer respectively, though they've recently picked up a bass player. Their 2011 album Red Balloon is the first release since their Mm Hmm EP in 2008, and the break seems to have done the band proud. Red Balloon oozes with commercial potential; tensile guitar wanes over tight, almost tribal rhythms, caught in the big-money nexus between radio-rock royalty Queens of the Stone Age and Aha Shake Heartbreak-era Kings of Leon. St. Louis' own Evan Sult, of Sleepy Kitty, appears to have discovered Bailiff, because he penned the band's online bio after overhearing a practice in Chicago. Read it, and listen to "When I Leave You Will Stay," below.

When I Leave You Will Stay by Bailiff

They're all real sharp players, working the tension between restraint and release. Josh's melodies are super efficient, delivered deadpan against a guitar that's saying as much as the lyrics are. The drums--well, that's my instrument. Ren's drums are fucking great, pulled so far back that you might not recognize how much technique and taste are informing the part.