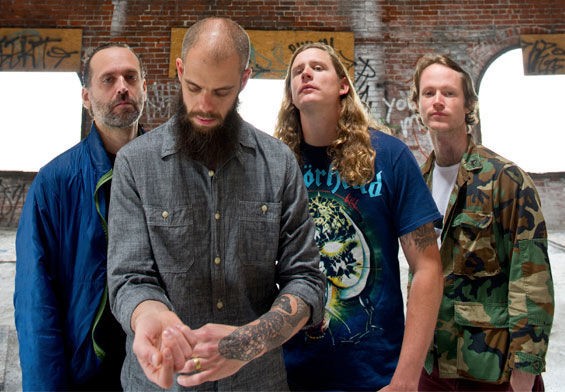 Recently, I interviewed John Baizley from Baroness. As a long-time fan of both Baroness and Baizley's artwork, I must admit I was a little nervous calling him up at 9:30 in the morning to ask him about the tough times and changes he and his band had just been through. With my brain still half asleep and my mouth mumbling like the living dead, I was greeted by a very friendly and easygoing John Dyer Baizley, who was about as polite and forthcoming as you could ever hope for anyone to be. So much so, that the entire interview could not fit into the paper. Here are the bits that got chopped, along with a video featuring footage from the band's first practice with St. Louis native Nick Jost.

See Also: - The Best St. Louis Metal Shows in June 2013 - Megadeth's Dave Mustaine: Believe It or Not, He's a Humanitarian

Rick Giordano: Yellow & Green was widely acclaimed and on the top of countless Best Albums of 2012 lists. Did that come as any surprise to you, and did it encourage your recovery or make it all the more frustrating that you couldn't be out touring and enjoying it?

John Baizley: The acclaim was a little bit of a surprise. I absolutely had built up a system of defensive tactics against potential naysayers. There weren't as many as I had hoped for -- I enjoy a good argument just as much as the next guy. I found myself in a defense position less often than I had assumed, so that was good. So yeah, we were a little surprised. Especially some of the more metal publications were really quite open-armed in their reception of the record, so that was great for us.

And then after the accident we had effectively played maybe two weeks of shows with the new record out and we were only playing a handful of new songs a night, so it's been very frustrating this year not to have had had the opportunity to play these songs. Not just from the standpoint of reaping the rewards, but just purely because of the fact that our lives have fallen into the rhythm of writing and recording a record so that we can tour and have an adventurous lifestyle. And see sights, and hear sounds and all that fun stuff that comes with touring. To have that temporarily taken from us was quite frustrating, especially considering that we reasonably understood that it would have been more advantageous to be out in support of that record rather than sitting and hoping that the record sold a little bit.

Fortunately we feel that it's sold enough that we feel confident to tour on it. But not so much that it's a sure thing. So it's kind of like back to square one in some ways, and I kind of see it as a good thing. We get to prove ourselves.

You seem to have a really optimistic attitude, and Baroness seem to be a rarity among most heavy bands as not being so deeply rooted in anger and negativity.

I'll argue with that. I don't' want to say our music is rooted in negativity but I will say that our music is a definitive product of the tougher, more anger-anxiety-stress-depressing things that happen to us. But our outlook is that music in general, and art in general can be an outlet for that sort of frustration or anger -- and a healthy one. So I see it as our responsibility to take whatever insults and injury that are taken to us -- personally or professionally or however -- we take all this negativity and turn it into something good.

That's what music was for me when I was a kid. I loved punk rock and was all about angry, aggressive, fast, loud music. And I've gotten older and more reflective and I've had to figure out a way to use that for my purposes at this stage of my life. So the music, a lot of times, is sort of based in the darker side of things. But we try to look it as a way to lighten things up or give ourselves some hope, and since the accident and everything it has been there for sure.

You've done all the album art for Baroness, as well as artwork for Pig Destroyer, Kvelertak, and a bunch of others. How do you divide your time between the guitar and the pencil as of late?

It's tough, because this recovery's kind of been painstaking in some ways, and I want to do a whole lot more some days than my body wants to do, which can be frustrating, I'm kind of overextended in my work load, but I like that -- that I'm capable of getting to a point where I can take on so much work that it's tough to divide my time. For the time being, music is clearly the focus. Being a musician's got a very finite box of time in which you can do anything other than play. So we're just gonna use that time and speed things up in the upcoming years and see what happens.

Continue to page two for more of our interview and video footage of St. Louisan Nick Jost's first practice with the band.