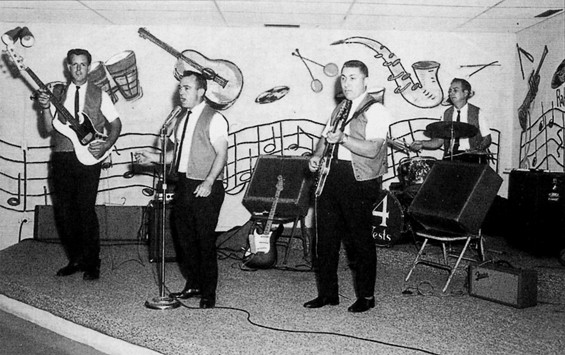 Courtesy Acclaim Press
The Four Vests, a popular local band in Southern Illinois, whom George accompanied for a few performances.

So. It's late September, 1963. The Beatles are on fire throughout the UK and Europe, topping the charts with the singles "Love Me Do," "Please Please Me," "From Me to You" and "She Loves You," which had reached the No. 1 slot earlier in the month. (It had been released in the U.S. but failed to chart.) With the break, George planned a trip to visit his older sister, initially with Ringo, who, after learning that Louise had arranged a local TV appearance, begged off, saying, "If she's going to make us work, I'm not going."

And so it was that George Harrison, along with brother Peter, stepped off a plane at Lambert Field in St. Louis and became the first Beatle to set foot on American soil.

And no one cared.

There were no throngs of screaming, frenzied young girls, no gang of reporters, no legions of police, no limo. Instead, there was a twenty-year-old British traveler with a strange haircut holding his bags, standing at his designated meeting spot beneath a replica of Lindbergh's Spirit of St. Louis, waiting for his ride.

Five short months later he would step off of another airplane at New York's John F. Kennedy International Airport and enter the national zeitgeist, where he has remained.

Louise, then-husband Gordon and their son and daughter brought their foreign uncles back to the house in Benton where "our German shepherd Sheba greeted him," which George loved, says Harrison. "We could never afford a pet when we were growing up. In Benton we had a five-bedroom house, and one bedroom was made into a playroom and they had train sets. When George grew up we never had any toys like that, so he and Pete spent hours playing with the kids."

In 1963, Benton was — as it is today — a tiny berg of a few thousand people in Southern Illinois. Its notable residents have included TV game-show host Gene Rayburn, legendary thoroughbred trainer Noble Threewitt and Oscar-nominated actor John Malkovich. (In '63, nine-year-old Malkovich lived not far away on South Main Street. His mother owned the Benton Evening News.) When you look up Benton history on the city's website, the 373 words on the page reveal but two highlights: The last public hanging in Illinois took place there in 1928 — "local gangster Charles Birger," for the record — and, yes, "George Harrison of The Beatles visited Benton while on vacation."

It's a small American town, and the then-nameless Beatle quite happily did what one does on vacation in a small American town. Which, for a raw lad from the north of England who grew up without indoor toilets, were simple, previously unknown delights. According to Louise, they went to the A&W where George gawked at the waitresses on roller skates. They went to the drive-in (his first) out on Route 37. They went shopping in the town square where George bought records and lost his wallet. (A teenager returned it.) They purchased T-bone steaks to barbecue, a grand novelty to the Liverpudlian.

"And we went camping and toasted wieners and marshmallows, which was completely new to him, at a place called Garden of the Gods," adds Harrison. "But I don't think George was ever a fish out of water. He was a Pisces, you know."

The after-dark thrills weren't confined to wieners and marshmallows, however. Louise, the self-appointed, ever-networking queen of Beatles promo, hooked her brother up with the hottest band in Southern Illinois, the Four Vests, a move that resulted in another historic moment: He was the first Beatle to play onstage in America. Down the road in West Frankfort. At VFW Post 3479.

Gabe McCarty was the Vests' bassist, playing a '59 Fender Precision he still owns. Now 81, the lifelong Bentonite, who was a sheet-metal worker for 52 years, recalls how it all went down. 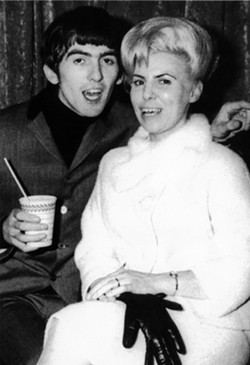 "She called me on the phone, said her brother was coming over from England. She'd heard that I had the best band around, so she wanted to know if I wanted to meet him," says McCarty with the flat, measured tone of a man describing a rebuilt carburetor. "I said yeah." How Louise got his number remains a mystery. "I don't know. I guess she asked around. Back then, it was easy to get your phone number."

Louise had played the Beatles' first UK album for McCarty, who thought it was "really different." Meaning he liked it. And he liked George, too. "He was really well-mannered. He had that long hair, it was unusual. Nobody else had hair like that. But he had a real nice disposition," says McCarty. The bassist invited the Beatle to the Four Vests' show that weekend at the VFW in nearby Eldorado, where — for a handful of songs, anyway — Harrison became the fifth Vest.

"I introduced him, and he got up and did a couple numbers," says McCarty. "We did 'Roll Over Beethoven,' then he wanted to do a Hank Williams song. Can you imagine that?"

"It really was amazing," recalls Louise of that long-ago night, the first time she had ever seen her brother perform. "When George started to sing and play, it was like a lightning flash had gone through the room. People were yelling and applauding."

McCarty backs up the story.

"They were all really pleased with him. One guy told me, 'Oh, you oughta hire that guy if he's trying out with you.'"

Would he have hired the guy? "Oh, yeah."

A few nights later, Harrison — clad in a dark suit, white shirt and no tie — took the stage yet again with the Vests, this time for a birthday party at the Bocce Ball Club in Benton. There he played "most of that job 'cause Kenny [Welch, the Vests' lead guitarist] just let him play, an hour, hour and a half. It went down pretty good, we had a good time that night. People wanted to know who he was, I told 'em he was from England, told 'em the story."

Interestingly, Harrison — a decade younger than the Vests — had enough material in common with the band to fill 90 minutes onstage. And nary a Beatles tune was played.

Speaking of Beatles tunes, McCarty trots out another memory that should have any dedicated Beatles fan salivating: the lost Harrison songs.

"We was at his sister's house, just pickin' around a little bit, and George asks if I ever wrote any songs, and I says no, I never did try. He says wait a minute. He run upstairs and come down with a leather bag and he has about sixteen handwritten songs, some chords and lyrics, that they had never recorded."

"I think he wrote all those," says McCarty flatly. "And he said, 'If this'll help you, you can take these and use 'em.' I said OK. He gave me an album, a long-play album the Beatles did, and I stuck 'em all in there, in the cover."

Assuming McCarty's memory is correct, he's talking about original Beatles songs that are apparently not even a footnote in Beatles lore. Remember that in the band's early years, John Lennon and Paul McCartney — who were cranking out hits at an astonishing rate — essentially wanted nothing to do with George's tunes. On the group's first UK album, Please Please Me, the lead guitarist's writing was nonexistent. He was only allowed to sing two lead vocals: "Chains," a Goffin-King number, and Lennon's "Do You Want to Know a Secret."

It's a romantically plausible notion that George was carrying around his rejected tunes and handed them over to McCarty as a goodwill gesture, or at least in the hope that someone might use them, especially a band in America. But what happened to them?

"I had a fire in my trailer," says McCarty, "about a year or so later. They were in there. Burned up every damn thing I had."

The Best Concerts in St. Louis This Week: September 15 to 21