Big Head Todd & the Monsters is Coming to the Pageant 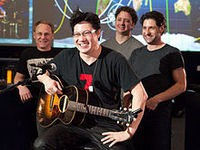 BHTM will be releasing its tenth studio album in 2011, but its the live show that has built the band a fan base nation wide. BHTM has made periodic stops at the Pageant over the years -- expect a polished set from a veteren band.