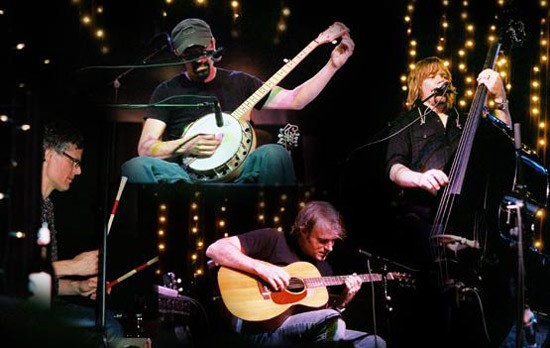 After three albums, countless shows and a tireless promotional campaign, local rap group Earthworms quietly broke up in September. The breakup was low profile - a post from rapper Mathias to the Earthworms page followed by a similar message from rapper Kama a couple weeks later. Citing "different directions" and being in "different places in our lives," Mathias says the split is amicable, a point backed up by Kama saying in a Facebook message that he "love(s) every single one of his band mates to death."

"I think we all feel like it ran its course," Mathias says. "The inspiration just wasn't there at the end, I don't think, to keep going."

Despite the breakup, all the members of Earthworms will stay musically active. Mathias, who released a solo album last year, is readying a new project called Mathias and the Pirates that will feature Ms. Vizion from the GreaTones and a host of other musicians. "What we're doing is we're getting instrumentals with live instruments being added and/or replacing existing parts in mind because we also have Grover Stewart on drums and Mo Eggeston going to be playing the keys for the most part and DJ LB is going to be the primary DJ with Mahf joining in when time allows," Mathias says. The mixture of beats and live instruments will extend to concerts too, depending on who is available to play each night.

DJ Mahf, of course, never stops working, whether he's pumping out another entry into his endless stream of mixtapes (including this year's Homemade Junk 3), playing every Friday at Miso in Clayton or working with Steddy P and other artist's on Steddy's Indyground label. Kama also has a weekly Friday gig called "My Riot" that takes place at Boogaloo in Maplewood where he plays songs from his ipod, emcees and freestyles (often with guests). He has also been periodically flying out to LA to work with clothing line Suburban Riot and noted producer/remixer Gaia 13 and to promote his album with Jonathan Toth from Hoth, this year's Kamatoth Cocktales. Rapper Black Patrick is busy raising a family, but still makes time to create beats.

Although they're disbanding, the members of Earthworms will still stay connected in their promotion of their USO tour documentary Capricorn Dreams. The group is shopping it to film festivals and recently received the final edit of the movie which now only needs a finished sound mix. Earthworms plans to host a screening next spring. A farewell show is also a possibility (Mathias is on record as wanting to do one). However the end of Earthworms plays out, both Mathias and Kama made it a point in their correspondence to thank St. Louis for its support of the group.

Cicero's, the small black box venue in the back of the restaurant of the same name on Delmar Boulevard, holds a unique place in St. Louis music history. The venue opened in 1977 a few blocks east of its current location, to which it moved in 1996. In the late '80s and early '90s it hosted shows from a deluge of burgeoning bands including many that now have legendary status: The Flaming Lips, Beck, Uncle Tupelo and Yo La Tengo among others. In recent years the venue has focused on local shows, but a change in management earlier this year has the potential to bring the venue's focus back to what it was in those early days, when in addition to booking local artists it also fostered talented yet relatively unproven touring bands working hard to build an audience.

Mike Cracchiolo is at the center of this shift. A co-founder of and talent buyer at the Firebird, he took over the role of talent buyer at Cicero's in mid-2011. Over the past few years, the Firebird has emerged as one of the premier venues in the city. Cracchiolo brings not only his experiences in helping to make the Firebird what it is, but also the ability to foster a healthy relationship between the two venues that can benefit both. St. Louis music fans are likely to notice the change gradually. In the months and years to come you'll likely find yourself going to more shows at Cicero's, and keeping a keen eye on their concert calendar in the effort to catch the next big thing.

We recently spoke to Cracchiolo about the past, present and future of Cicero's. Look for that interview to appear in this space in the very near future.

What we gained: A venue that embraces its historical role in St. Louis music history and is striving to regain its status as a proving ground for tomorrow's best acts.