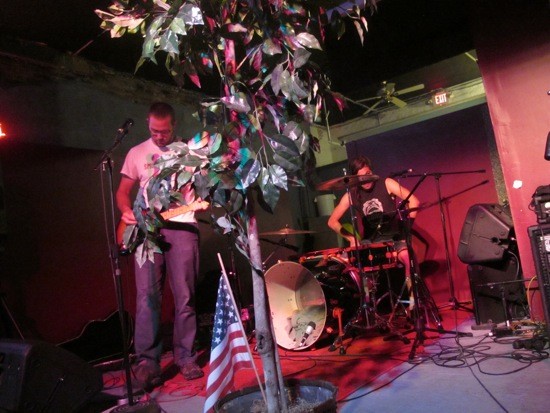 It seemed like an unassuming night at the Heavy Anchor, and generally it was. Early in the evening, there were more folks out on the smoking patio than the bar and concert room combined. As time passed though, both rooms became more populated -- livelier thanks, in part, to the bar's choice selection of fine beers and stiff drinks served out of mason jars.

Bird's Mile Home (Missoula, MT), Bob Reuter's Alley Ghost, and the Ghetto Tumbleweeds. The three bands have distinctly different sounds, but each are fueled by the same restless inferno sizzling at the bottom of their collective booze-damaged gut.

Hiding behind a prop shrub with an American flag sticking out of its base, Bird's Mile Home ripped through speedy, distortion-drenched folk tunes with little banter between. While the band offers a healthy dose of acoustic, home-on-the-range folk squalors on album, its live set was more comprised of Minutemen-infused, punk-paced veracity. The noodling bass and breakneck drumming proved that Bird's Mile Home can jam econo with the best of them.

Resembling a more demented, street-wise Marshall Crenshaw, Bob Reuter and his Alley Ghosts galloped through what could only be described as a spiritual South City hootenanny. Reuter preached and hollered twisted liturgies aimed towards the burnouts and ne'er-do-wells of the world, all the while maintaining an infectious blues-borne, romp 'n'roll backbeat. The concert room wasn't at capacity by any means, but it was certainly overfilling with life.

Personal bias: It would be hard to give an objective take on the Ghetto Tumbleweeds, as my little brother makes up half of the duo. It's still safe to say the Tumbleweeds sound like the two dudes next door that bang on their guitars too loud after they polish off a bottle of whiskey at 2 a.m. Country standards with gutter punk spirit.

Overheard: "I can't get my shirt off. I've been wearing it for three days and now it's stuck to me." - Drummer of Bird's Mile Home halfway through its set.