Black Joe Lewis and the Honeybears at Off Broadway, 6/16/11: Review and Setlist 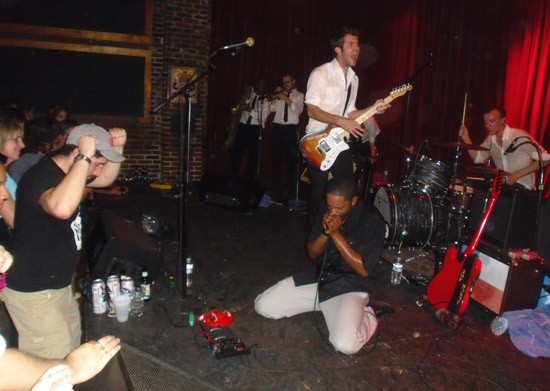 Roy Kasten
Black Joe Lewis gets down at Off Broadway

Black Joe Lewis and the Honeybears
Off Broadway
Thursday, June 16, 2011

My first encounter with Black Joe Lewis and the Honeybears was 2008 in Austin. The band played outdoors at one of those warm-beer free parties at SXSW. The young Austinite and his high-as-satellites funk-rock band were dressed in Star Trek tunics. When the set ended with a feet-freaking, down-on-his-knees finale to "Bitch, I Love You" - still his most notorious number - I wondered just what kind of act this was.

It wasn't an act. Not exactly. Still isn't.

Since then, Lewis has gone on from drawing the indie hipsters who get ironic pleasure out of blues slumming to recording for Americana heavyweight Lost Highway, earning slots on every other summer festival in the land - Coachella and Bonnaroo for starters - and expanding his reach to festival kids, blues devotees, jam-band heads and rock & rollers. He looks and sounds happy; his live show remains as raw and manic and in-the-ecstatic-moment as any live show could be.

His return to Off Broadway after a cancelled gig last year was welcomed by a packed but not-quite-sold-out crowd, most of whom arrived early enough for local opening band the Rhythm Section Road Show. Led by bassist Andy Coco, who named the group after his 88.1 KDHX radio show (full disclosure time: Andy is a friend and co-worker/volunteer of mine at that radio station), the group picks up where Coco's other funk band, the Dogtown Allstars, leaves off, with Nathan Hershey and Adam Wilke still on organ/piano and guitar respectively, and adding drummer Benet Schaeffer of Gumbohead and sometimes horns, but not tonight. The band extends funk instrumentals in all the right, tight ways, with a repertoire that includes Herbie Hancock, Galactic and, of course, James Brown. Tonight, "I'll Go Crazy" is precise but fully-felt, and where the Allstars often endeavored to jam every song loud and hard and to-the-climactic-limits, this new project has a little more slink and sinew to the groove, while still plenty nasty and greasy.

So, this was a night for dancing, even for those of us who don't dance, but rather just stand about and twitch a bit. When 9:30 p.m. rolled around, Lewis and his sextet - Zach Ernst on guitar, Bill Stevenson on bass, Matt Strmiska on drums and a horn section of Jason Frey, Derek Phelps and Joe Woullard - warmed up with "Stop Breaking Down," the correct signal to one of their sound's primal sources: Exile On Mainstreet-era Stones. Even without organ or piano, the warm punch of the saxophones and trumpets, and the raking guitar licks, the way the rhythm section set about to rock hard and groove easy at once, and the beautiful film of grime over the whole sound, recalled a lost rock & soul weekend in a trailer filled with bourbon, wine and weed.

Reconstructing a Black Joe Lewis show, let alone a setlist - see the photo at the end of article for evidence - is not for the faint of heart. It all becomes a blur of Jack Daniels shots and PBR tall boys and booty-shaking, even for those of us without booties. "Stop Breaking Down" bleeds into "Livin' in the Jungle" (a mean Guns 'n' Roses echo) into "Black Snake," "Ballad of Jimmy Tanks" and the stuttering, shimmying frenzy that is "Bobby Booshay." The band is a perpetual motion machine, darting and spinning from one side of the stage to the other, playing chicken with each other, teasing the apron with guitar and bass, and then stumbling down into the crowd on every other song. Lewis grabs a bullet microphone for a harmonica solo that shreds as hard as his guitar solos, and Stevenson collapses on stage, writhes about, and then untwists himself into upright position like he's been doing way too much yoga. The band has gotten limber.

Black Joe Lewis and the Honeybears will likely forever be associated with the ongoing soul revival, and while they probably don't mind so much, they are rockers more than anything, especially in the rhythm section - Strmiska and Stevenson played half the night with their glasses sweat-slid down across their mouths - but also in Lewis' slurring, biting, snarling and incomprehensible delivery. He can sing, that's for sure, but he's less interested in finding emotion in melody and phrasing, and more interested in just blasting his way into your bones. His guitar riffs are a sloppy, slashing mess, brilliant in their way, especially when the set finds a climax in the call and response of "Booty City" and a delirious "Sugarfoot" and "You Been Lyin'," which sounded like Zeppelin rammed through Sly and the Family Stone. The band and crowd should have been worn out after a sixteen-song set, but Lewis returned for an encore of "Messin'," "Jesus Took My Hand," and "Gunpowder," with full-on Jr. Walker-esque horn charts, and then a ridiculous and inspired cover of the Trashmen's "Surfin' Bird."

But bird was not the word. Booty is more like it.

Overheard: Black Joe Lewis will drop hints: "Any smokers in this city? I'm not talking about tobacco? Yeah? Well, I ain't smelled none yet. Y'all are trippin'."

Critic's Notebook: Last night, along with "Surfin' Bird," the band's cover selections ranged from Hound Dog Taylor's "Let's Get Funky" to Dead Boys' "What Love Is."