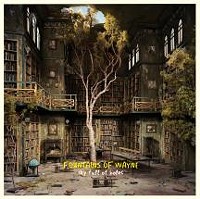 Boston Spaceships Guided By Voices and Decemberists hybrid band Boston Spaceships release Let It Beard today, making it its fifth full-length release. Clocking in at 75 minutes, the 26-track Let It Beard navigates the lo-fi sound that Pollard excelled in playing, but doesn't devote too much focus to any one thing. Addressing the album as "a beast," Under the Radar rates Let It Beard a 7 out of 10, summing up its satisfaction with the album, including songs featuring Wire's Colin Newman, with "what more could you ask for?"

Fountains of Wayne Four years after its last release, garden state alternative pop craftsmen Fountains of Wayne resurface with Sky Full of Holes despite mismatched schedules, and the "semi-dysfunctional nature of the band," according to bassist

Keb Mo Keb Mo knows how to play the blues, but he also knows how to play whatever comes out, and play it well, which he does in Reflections. The album is sprinkled with musical appearances by India.Arie on "Crush on You," Vince Gill on "My Baby's Tellin' Me Lies" and Marcus Miller, among others. Reflections is also Keb Mo's first release on his own record label, after parting ways with Sony Records after releasing Suitcase in 2006.