C.S. Muncy
Bridgett Everett will perform at the Firebird on March 12.

"Hit the track!" Bridget Everett growls as she lowers herself to the lip of the Joe's Pub stage in Manhattan, lifting the hem of her flowing silver gown to flash the sold-out crowd in time to the slinky R&B beat.

"Short one, long one, doesn't matter/Just suck on that bean, watch it get fatter/You've had a bad day, you're feeling like shit/You want to beat something up? Beat up this clit/Here's the combination to my lovely lady locker/She'll pop in your mouth like Orville Redenbacher."

"Eat it, eat it," she sings, repeating her song's titular chorus.

A backup singer presents a can of whipped cream. Everett grins down at the audience member she's targeted.

Everett gives the can a vigorous shake, traces a frothy line up her black panties, and interlaces her fingers behind his head.

His face descends and Everett's legs gyrate like Elvis in an earthquake. Glancing down again, she laughs.

"Cut the track!" she hollers. The band fades out behind her. "Stand up and show everybody what it's like to be a man!" 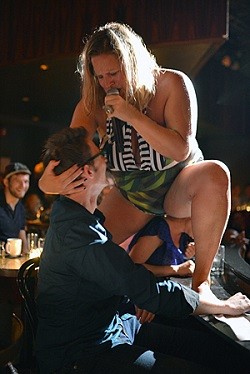 Over the past hour Everett has swigged from something stuffed into a brown paper bag, and has helped herself to several audience members' wine glasses. A grown man portraying one of Everett's (several) unwanted pregnancies has stumbled blindly out a side door in bald cap and adult diaper, harmonizing with Everett to the saccharine duet "Let Me Live" as he made his way onstage and into her arms. ("If they were all that sweet," she sighed, the "baby" perched atop her knee, "I woulda kept 'em.")

The audience's gasping roar — a vocal celebration of Everett's fearless pushing of performance boundaries — has been building steadily all night. And with the exaggerated oral-sex simulation, Everett grants the delirious crowd permission to bust an emotional nut.

"It's like you're on a great date and you just want to keep going!" Everett enthuses later of Joe's Pub, her home venue since 2008. "Go to the next bar and then go back to bed and have sex and then do it again and then make French toast and have a fucking espresso! That's how I feel when I'm performing there. It's like I'm fucking 200 people, and we're going to have coffee in the morning."

Everett's soaring, purring voice — which croons lube-soaked choruses like "Tell me, does this dick make my ass look big?" — is classically trained. Her commanding stage outfits, often flung loose to reveal racy undergarments, or, on occasion, nothing at all, will soon be featured in a photography book by clothing designer Todd Oldham. With performance artists Kenny Mellman and Neal Medlyn, she helped spearhead a four-year run of the monthly live pop-covers show Our Hit Parade at Joe's. She's shared the Carnegie Hall stage with Patti LuPone, while her band, the Tender Moments, includes one of the Beastie Boys, Adam "Ad-Rock" Horovitz.

In the world of standup comedy, Everett is best known for closing out the 2013 and 2014 season finales of Comedy Central's Inside Amy Schumer with full-contact performances of her songs "Titties" and "What I Gotta Do (To Get That Dick in My Mouth)?" In the acting realm, she's popped up as a wannabe personal assistant to Carrie Bradshaw in the first Sex and the City film; as a bus passenger heading to a conjugal visit on CBS sitcom 2 Broke Girls; and, most recently, in two Schumer sketches.

Yet music remains Everett's driving passion. "Even at my worst, I'm still gonna give 120 percent."

Since her 2007 debut live show, At Least It's Pink, Everett has infused a unique brand of just-go-for-it into the performance scene. Rather than relying on slick self-promotion, Everett focuses on delivering show after unforgettable show — one she's bringing to St. Louis for the first time on March 12 at the Firebird. Her repertoire will feature a mix of numbers from her show Rock Bottom, as well as her band, the Tender Moments. Given all the motorboating, table-dancing and pillar-humping, she's unquestionably a rampant violator of personal space. But Everett's physicality is only one element of the impression she leaves onstage. Presenting her life as an open book and her hang-ups as something best worked through in public, Everett is an artist who wiggles boldly into laps and minds alike.