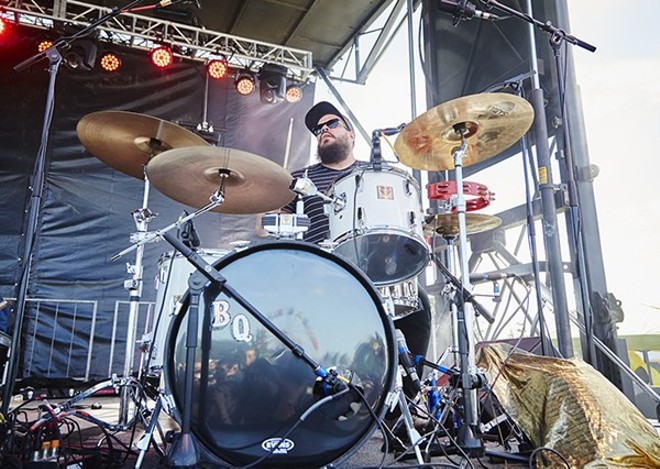 Photo by Steve Truesdell
Bruiser Queen drummer Jason Potter, performing at this year's LouFest.
A St. Louis musician and his companion were beaten and robbed at gunpoint by a group of five men in the early morning hours of Thursday, October 6, while the two were returning to the San Loo bar from Mangia Italiano to collect their vehicles. The attackers fled the scene in a silver four-door sedan.

Bruiser Queen drummer Jason Potter says he and a friend, Aileen Kirk, were on the 3200 block of Cherokee Street, between San Loo and the intersection of Cherokee and Compton, around 3:20 a.m. when a passing car slowed and parked just up the street from their location. Five men then exited the car with guns drawn and announced a robbery.

"As we started to kind of get toward our cars or whatever, this silver car pulls up, closer to San Loo — the door of San Loo was about three or four spaces up — and kinda comes barreling in and parks in front of us," Potter says. "These five guys get out of the car and start walking towards us. And Aileen goes, 'We're about to get mugged.'"

Kirk was correct. One of the men put a gun to Potter's head and demanded his money. Potter complied, handing over his wallet and dropping to the ground, hands raised. The group then began kicking him and hitting him repeatedly with a pistol. Kirk was also punched in the face before handing over her purse. The group of attackers fled when another vehicle appeared on the scene, leaving Potter in a daze.

"I was bleeding a lot from my head and I didn't know what happened — I felt like I'd maybe been shot or something because of how much I was bleeding and how shitty I felt," Potter recalls.

A couple occupying the approaching car rushed to the injured duo's aid and used their own vehicle to transport them to St. Alexius Hospital on South Broadway.

"They just rolled up and were just super fucking nice," Potter says. "It was terrible man, I was bleeding everywhere — it was like a river. And they were like, totally cool with the whole thing. He was just hauling ass. Skipping stop signs and everything else."

Potter suffered gashes on his head that required ten staples — six in the forehead and four in his scalp. Kirk was treated for a welt and bruising on the side of her face. Potter is just grateful it wasn't worse.

Bruiser Queen is a celebrated garage-rock band from St. Louis. They played this year's LouFest and have been recent recipients of RFT Music Awards for Best Garage-Rock Band in 2015 and Best Rock Band in 2016. The group has also graced the cover of Riverfront Times.

All things considered, Potter seems to be in remarkably good spirits following the terrifying attack.

"More than anything else I just hope to get a description out there of how it goes down," he says. "So if someone rolls up in a car right in front of you, you know to watch out."