Bully's Alicia Bognanno Does It All 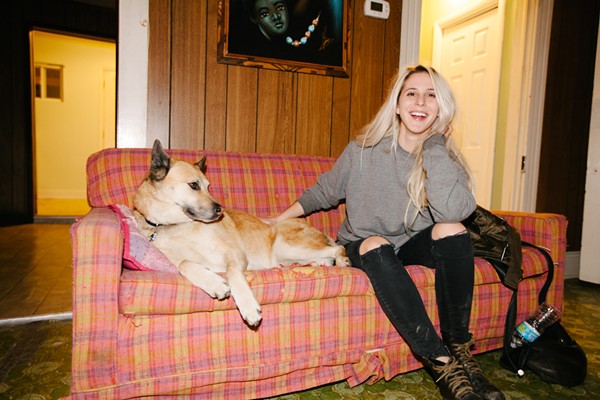 Though no one would confuse Bognanno’s crunchy guitar and screaming vocals for Gibson’s upbeat '80s pop, the fact that she wrote and engineered her band’s debut album Feels Like evokes memories of Gibson, who became the youngest artist to ever write, perform and produce a No. 1 single in 1988.

“[Our album] hasn’t sold nearly as well," a laughing Bognanno says of the comparison, “but I’ll take it.”

Album art for Feels Like
Though in her twenties, Bognanno's music career is younger than Gibson's was when the latter accomplished the feat at seventeen. Describing herself as “interested in music forever,” Bognanno didn’t make the jump into writing or playing an instrument until she enrolled in Middle Tennessee University’s audio engineering program.

“I didn’t grow up in a musical family,” she says, citing Ace of Base and Motown songs her grandmother liked as early musical experiences. Once she got to college, however, Bognanno gained access to instruments through roommates who were in bands. Beginning on piano, she eventually found her way to the guitar. “I felt I could express myself creatively a lot more though guitar and pedals than piano,” she says.

While in college, she also took an internship at Steve Albini’s Electrical Audio studios in Chicago, where she learned skills — especially the need to plan out studio ideas ahead of time — that would eventually inform her production work on Bully’s debut. Her time interning also yielded a love for analog recording.

“It was really cool to see bands come in and out and have a record mixed in eight days,” Bognanno says. “Just seeing that, versus a studio where people are using Pro Tools — adding a bunch of instruments that you can’t replicate live.”

The album definitely has a live feel. After a quick four count from drummer Stewart Copeland (no, not the guy from the Police), opening track “I Remember” blasts the listener across the face with a wall of guitar and Bognanno’s screaming vocals. (While it may not be immediately apparent, with lyrics including “I know what makes you cry,” the singer described “I Remember” as a love song during a recent appearance on the radio program “Sound Opinions.”)


Upon full listen, the album may be one of the best of the “'90s revival” sound that has become prevalent in the last few years — even if its chief architect was listening to “I Saw The Sign” when that sound was created. And though some have referenced Hole when attempting to describe Bully, a more apt comparison may be the Muffs — loud, fast guitars with vocals that veer from quiet and sweet to a raspy screech in a matter of seconds. But where the trademark scream of the Muffs’ Kim Shattuck had an air of brattiness to it, Bognanno;s delivery is pure rage.

“I never really spent much time with them,” Bognanno says of the Muffs. “[This is] the second time they’ve been mentioned. I’m going to give them a listen once we get going today.” The band was about to leave from Detroit en route to their next show in Champaign, Illinois. Tour-wise, Bully has been going for almost a year straight.

“I haven’t really been home since October [of 2014],” Bognanno says. “The more you’re gone, the less business you have at home. When you’re gone you can just focus on shows. I’ve fallen in love with a lot of cities — it’s good to keep going back to them.”

Yet for those who may have missed the band during its whirlwind year of touring — which included a stop in St. Louis earlier this year opening for Best Coast at the Ready Room — its headlining show at Off Broadway should be a delight even for those who became fans by discovering Feels Like. Thanks to Bognanno's production work, the sound is similar.

“I personally get bummed out when I see a show and it doesn’t sound like the record," she says. "And vice versa."