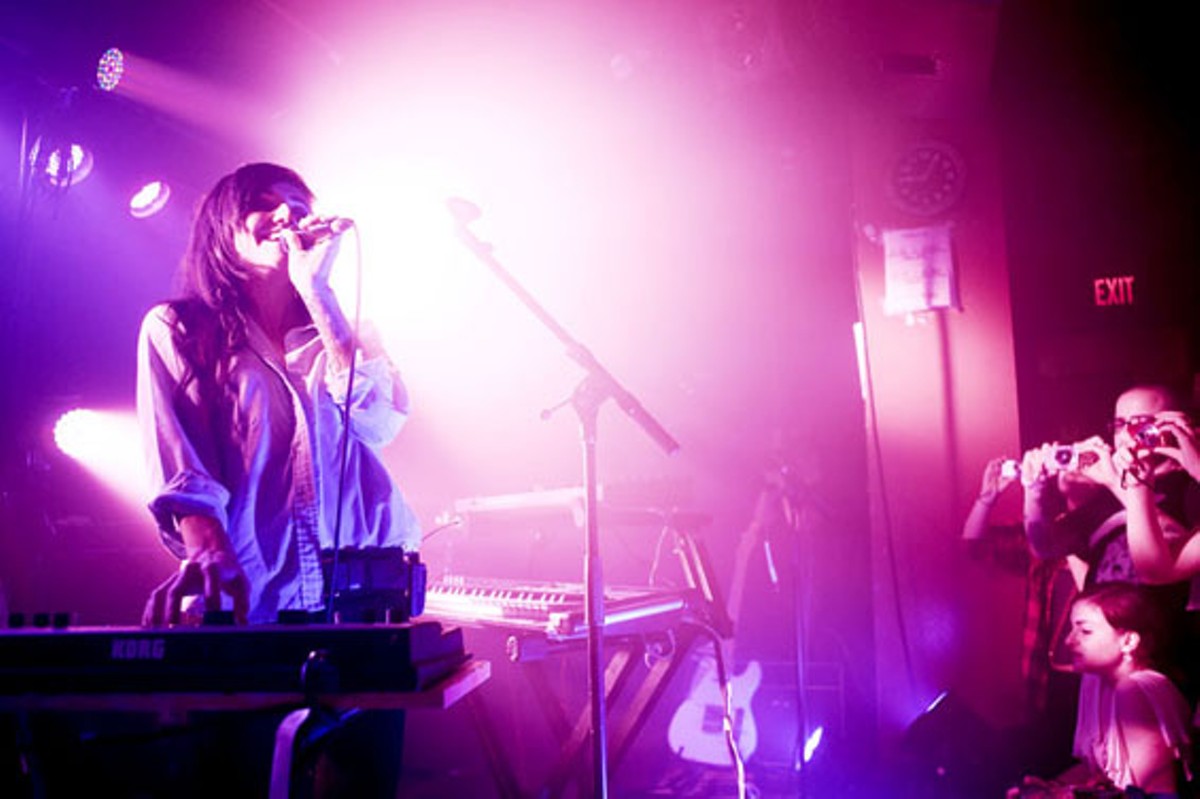 When Mike Cracchiolo and Kenny Snarzyk attended their weekly meeting at Cicero's last Monday, they were in good spirits. Snarzyk, the venue's publicist, had just played a packed New Year's Eve show at the venue with his band Fister alongside Not Waving but Drowning and Machree. The RFT had just included Cracchiolo's takeover of booking at Cicero's as one of 2011's "Biggest St. Louis Music News Stories."

"When we went in at 2 p.m., I was surprised to see BC [assistant general manager and special-events manager Brian Colon]," Snarzyk says. "He told me that Shawn [Jacobs, venue owner] wanted him to come early for the meeting. Then Shawn came in and fired us. I thought he was joking at first. He wasn't."

Snarzyk continues, "Shawn said things weren't working out, and he wanted a clean break, which really caught us off-guard. Honestly, we weren't expecting anything like that. We had been there for six months, and things were looking up, but he just wasn't seeing the numbers he wanted."

"We were basically just told that they decided to go in a different direction," Cracchiolo says. "There wasn't a lot of talk in the meeting about specifics, other than they didn't see enough improvement in the numbers, and they had complaints about my organizational abilities. I was fairly clear from the get go that I felt my priority was to spend my time booking, not to fill out paperwork in the most accurate way. I think that rubbed them the wrong way, and there were clerical errors on my end. And I thought that was just growing pains, and we kind of squashed that by the end. There's no good time to hear they didn't want to work with us anymore, but it was particularly bitter for me."

There were disconnects between Cracchiolo and Snarzyk with the venue owner. "Shawn's old-school; he doesn't even use the Internet or anything," Snarzyk says. "Most of the time we'd work from home, and my job rarely involved me to physically be at Cicero's. He didn't see us knee deep in the mess. He saw us coming in to pick up a paycheck and maybe getting a bite to eat every once in a while. So maybe to him we were dead weight."

"At the meeting, Shawn didn't even know what Kenny did there," Cracchiolo says. "He talked to both of us as if we were both booking shows. He told Kenny that he could still book shows every once in a while. Kenny said, 'I'm not going to book shows here because I don't book shows. I'm your publicist.'"

When Cracchiolo and Snarzyk began working at Cicero's, they inherited some of the venue's problems. "There were shows already scheduled when we got there, and they told us not to wipe them off the books no matter how bad they would be," Snarzyk says. "Shows that shouldn't have been booked, out-of-town bands with no draw and no local support. Then at this meeting Shawn asked why we didn't just cancel those shows and book our own over them. But we were told not to.

"We didn't really get the books to ourselves 100 percent until September, and Mike did a hell of a job booking great shows. Then the Cardinals went into the playoffs and annihilated everything. We had Reverend Peyton's Big Damn Band, which should have sold out the room, coming in a little bit shy of the guarantee. The Cardinals were playing the Phillies that night, and Wilco was playing across town, so it was a tough night on everybody. And November was good. December and January are bad for every venue, but we still did quite a few successful shows last month."

The pair was also handed a room with an identity crisis. Cicero's was once a dirty basement venue that hosted experimental shows and future legends such as Beck and the Flaming Lips. Most people remember Cicero's more recently as a haven for jam bands. "People might turn their noses up at Cicero's, but they were really thriving as a jam-band room," Cracchiolo says. "After that died down, they meandered for a bit."

In a recent blog post on RFT Music, Chris Bay speculated that Cracchiolo handling the venue's booking "may have the potential to bring the focus back to what [Cicero's] was in those early days, when in addition to booking local artists it also fostered talented yet relatively unproven touring bands working hard to build an audience."

Cracchiolo was hired based on his success booking at the Firebird, where his agenda is bringing national acts and hosting special-event shows for local bands. "I have relationships with agents, and I've developed credibility with them," Cracchiolo says. "We've developed trust, and that more than anything is what opened Cicero's up to doing more national groundbreaking stuff. Agents have different concerns. Sometimes it's about the bottom line, sometimes it's about how the bands are going to be treated, sometimes it's about the size of the room, the crowd they perceive the room to have. Cicero's had fallen off the map to agents, and there's no question that the reason they were OK with doing shows there was because we were the ones doing it."

Cracchiolo continues, "It's not that they didn't know Cicero's exists. It's not that they didn't know there was a 200-capacity room in St. Louis. It was because we bridged that gap, and we made them comfortable bringing their bands to the room. That's probably the single most important thing somebody could have done for the place if the goal is to book national talent. And we didn't have a real clear goal going in, it was a process of finding what was going to work and who was going to respond well to the room. We were just finally getting a handle on it and starting to expand on it when the rug was pulled out from under us."

The only Cicero's manager available for comment was general manager Karen McVicker. She dismisses the idea that Cracchiolo and Snarzyk's departure will have much of an effect on the venue. "We've done national bands on and off since we started doing live music," she says. "We've been doing live music since 1984, and we'll continue doing live music."

The future of Cicero's is now somewhat unclear, though Cracchiolo and Snarzyk feel no animosity toward the venue. "I honestly don't want that place to do bad," Snarzyk says.

"I really really enjoyed working with both Kenny and [the] great staff at Cicero's," Cracchiolo says. "They have to decide what's best for their business. I don't have any bad feelings, I just feel bad if in the end it's all a waste of time. I think maybe that at the end of the day they didn't know quite what they wanted or what to expect, and those expectations were certainly never made clear to me. I had my own vision of what the place could be, and I think we made a lot of headway, and I hate to see that not come to fruition."

Snarzyk concurs, "Shawn's a good guy, and I don't think he's stupid. He's been running that place for 35 years, and he'll be running it for a long time in the future. I just think he made a bad decision this time."