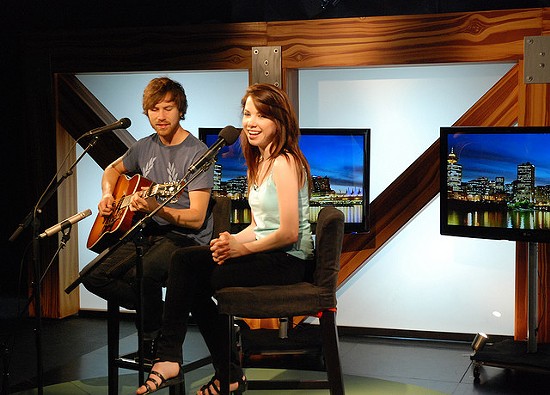 I may have been the last person to notice this--surely Carly Rae Jepsen noticed it first--but here's when I noticed it: Rihanna released "The Only Girl in the World," and I was briefly convinced I'd accidentally set the satellite radio to one of those Europop stations where the DJ is broadcasting from the bottom bunk of a youth hostel in the former East Germany. I listened to the boomy synths and the near-English drone and for a few days I lectured anyone unfortunate enough to sit next to me about how Rock And Roll Was Truly Dead in the marketplace and destined to be filed next to jazz and the blues among the genres of popular music kept alive by NPR and people who buy Bose radios.

Into this breach: Indie hits "We Are Young," and then "Somebody that I Used To Know," and now "Call Me Maybe." I'm not going to pretend that they share a lot, other than massive, endless Billboard success, but they share a little: Namely, a command of rock-sounding tropes.

Commercially rock probably is the weakest it's been in decades, and I think that's a legitimate problem for it as a living art form. but like most amateur lecturers I was basically wrong, and also annoying my girlfriend, probably. But what I was recognizing while Rihanna abandoned all pretense of appealing to non-dancers wasn't the death of rock-it was the death of Pop with Rock and Roll Characteristics.

Debbie Gibson didn't play rock and roll, or Savage Garden or the Brady Bunch, but for 50 years or so pop almost always used the vocabulary of rock and roll. Guitars and drum sets, rebellion and running away, long-haired types who purport to write their own songs and Get Back To Basics on their followup album. Pop songs had rock noises and structures and pop artists sounded like rockers when they spoke to reporters.