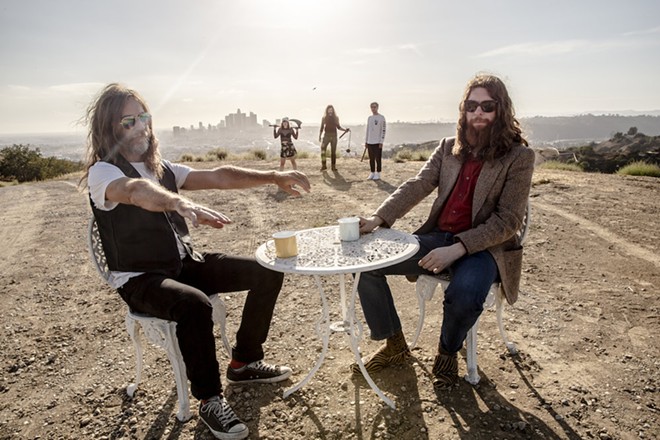 VIA 7S MANAGEMENT
Black Mountain will perform at the Duck Room on Tuesday night.
Black Mountain’s evolution has followed a nearly straight line through the timeline of noisy and outre rock & roll; its self-titled debut plumbed scuzzy proto-stoner grooves and later albums moved closer to prog and metal with hard-chugging riffs and eerie Mellotron swells. On its latest, Destroyer, Black Mountain has moved into the ’80s with glossy synths and a little bit of The Wall’s creeping paranoia framing band leader Stephen McBean’s hazy, potent visions. The album’s name references neither the Kiss album nor fellow Canadian Dan Bejar’s long-running project, but rather the 1985 Dodge vehicle. Listening in 2019, one can imagine some of these sounds blasting from a Destroyer’s tape deck.

Twisting the Night Away: Avant-folk guitarist and singer Ryley Walker bubbled up toward the mainstream with last year’s song-by-song cover of Dave Matthews Band’s shelved The Lillywhite Sessions, but this year’s instrumental recording with drummer Charles Rumback, Little Common Twist, is a better picture of his talents. He opens the show with a solo set.