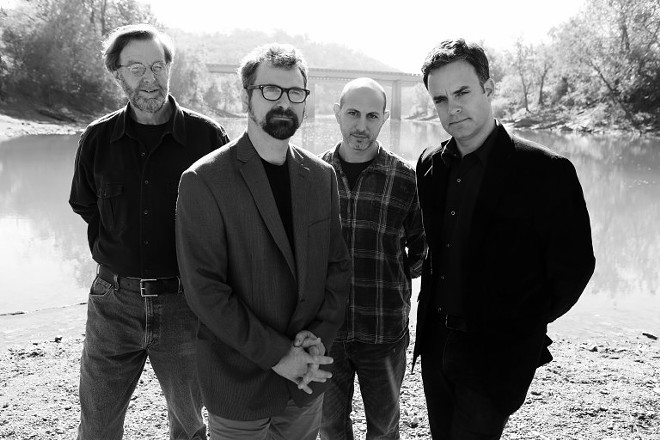 When Cave States released its debut The Great Divide in late 2013, it presented a few familiar voices in a newer, more Spartan setting. Danny Kathriner and Chris Grabau had drifted in and out of each other's projects over the years — most recently with Kathriner's Half Knots and Grabau's Magnolia Summer — but Cave States provided a setting for quieter, more collaborative music from two singers and songwriters more accustomed to leading their own groups.

With its sophomore LP, the band has kept the electric guitars in their cases but used some quasi-orchestral flourishes in their place. The songs on True Life retain a reflective quality and a wood-grain warmth, but at nearly every turn Cave States has layered nuance and texture to round out the edges of these compositions.

Around a patio table at Grabau's Kirkwood homestead (I mean that literally; his family maintains a chicken coop), the two chief songwriters and multi-instrumentalist/recording engineer Todd Schnitzer talk about how the band has grown into a fuller, fleshed-out group while retaining its commitment to space.

"Danny invited me to come play guitar at a Half Knots show, and then from there, we thought, 'This is kind of exciting,'" says Grabau of the band's genesis. "We started trading ideas and that led into recording, and as we were finishing up that recording we went straight into the second one. So I feel like because it feeds into itself — the collaborative process of working together — I feel like we will keep going as long as it is exciting and interesting, and as long as it stretches you in certain ways."

Kathriner calls Cave States the "sole vehicle" for both him and Grabau, noting that he has worked with both Schnitzer and pedal steel player John Higgins for years. "I guess I really thought that our songwriting and our tastes and our sensitivities to music gelled," says Kathriner.

Grabau first made local waves in the late '90s with his nervy, college-rock-oriented trio Stillwater. He solidified his status as leader of the impressionistic but still guitar-centric Magnolia Summer. Working with Kathriner and company afforded him the opportunity to peel back songs that might be otherwise arranged with the sonic density of rock & roll.

"I think the difference between the things I've done in the past and this is that what we've done here is pay more attention to space," says Grabau. "I think in previous recordings with Magnolia Summer, there were a lot of layers I was trying to put in. Here, it seems like space is on equal footing. What you don't do is almost more important that what you do in a song."

"It's a conscious effort to be a little more spacious," echoes Kathriner. "You have any instrument at your disposal with technology, and it's so easy to go over the top. It's an exercise in restraint."

The band pushes against that idea of folksy minimalism throughout True Life, with Schnitzer's compositional know-how lending smart color and dynamics to these songs. Kathriner's loping waltz "Lazy Susan" could have just as likely retained its initial shape as a front-porch strummer, but the studio flourishes give it a chamber-pop sheen. The wheezing of Mellotron flutes and the rattle of distant drums lend a haunting quality, and a string section gives glimpses of grandiosity.

"I spent a lot of time on the string arrangement for 'Lazy Susan,'" says Schnitzer, whose day job involves writing, arranging and recording commercial music. "I was going for the Randy Newman / Good Old Boys strings sound, like 'Louisiana 1927.' That whole vibe. I don't think I got that, but that was my aim," he says with a laugh.

The band's gentle approach to instrumentation is clearest on Kathriner's songs, which stand against some of the starkness of Grabau's contributions, like the sweetly rootsy "Changing on Me" or the reflective opener "Commuter." "No Words" comes in early with a lockstep rhythm section and a violin drop-in that goes from sawing to soothing and back again. The song's mix of tight, simple pop construction and an ebullient chorus recalls the best moments of the Go-Betweens, another collaboration between two distinct songwriters who nonetheless were able to ably prop up the other's work.

"We didn't want to make the same kind of record, but you serve the song," says Grabau of the new material. "It felt like we could take it in a certain direction, and as you begin to figure out your approach, it will inform whether you add to it or not. Knowing that we didn't feel like we had to repeat the sparseness of the first record — we could do whatever we wanted."

Stream the new album below: