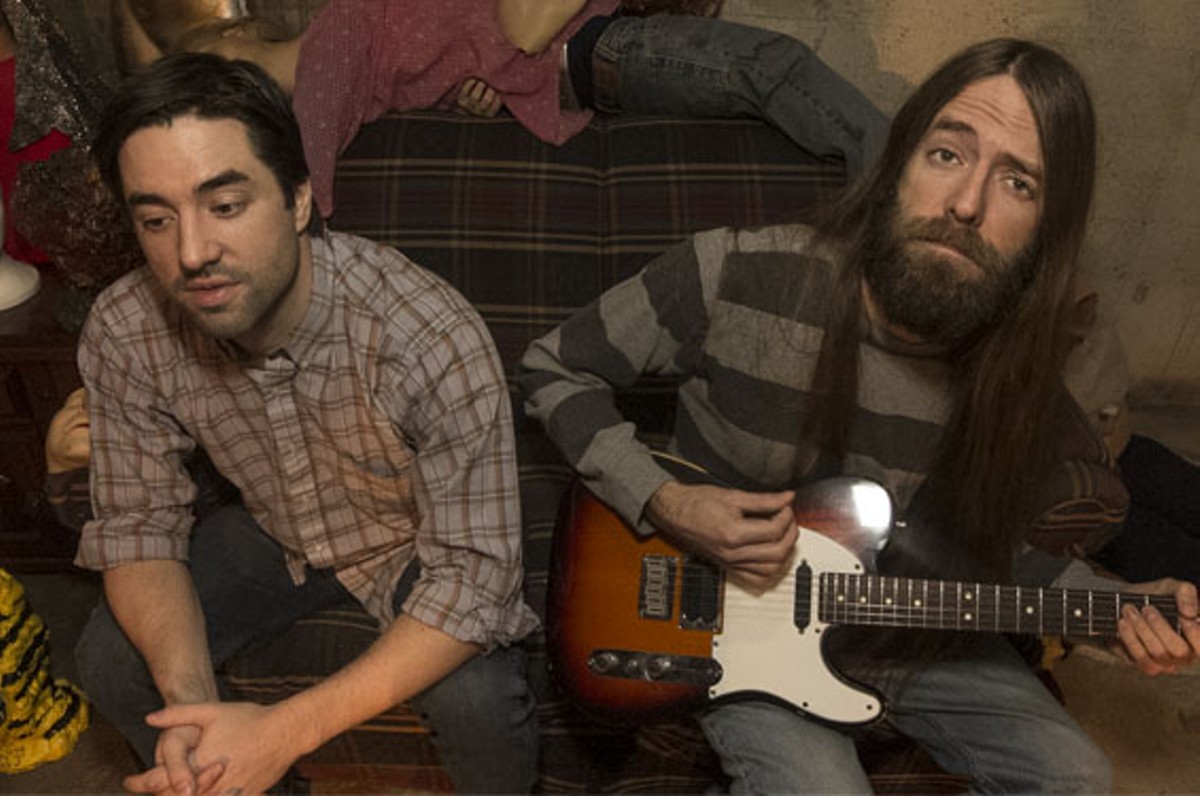 Matt and Bryan Basler, the brothers behind Tok. Matthew Sawicki

"In sixth grade, my friend said he saw some movie where Jimi Hendrix got high and had sex with a stuffed rabbit," begins Bryan Basler, lead guitarist and vocalist of St. Louis' Tok. "And I was like, 'That never happened.' So we were drawing this Easter bunny on a piece of paper later on, and my friend goes 'Ha ha, it's the sex rabbit!' I said, 'So what are we going to name this thing?' And he says, 'Let's name it Tok.'"

"I know for a minute, we were almost called Hacky Sack," Bryan's younger brother, bassist Matt Basler, chimes in. The siblings started Tok in 1994 under guidance from their guitar teacher, Schwag frontman Jimmy Tebeau.

"Mom and Matt came to pick me up from lessons one day after [Tebeau] told me to start a band with his son Chris," Bryan remembers. "We were thinking about who would play bass and my brother walks in. [Tebeau] says, 'How 'bout him?'"

"I just didn't want to tell an adult 'no,' you know? So I'm like, 'Oh, yeah, OK,'" Matt adds. Bryan and Matt, ages thirteen and ten at the time, started the rock trio with Tebeau's son. Tok's first show was opening for the Schwag at the Schwagstock founder's south-county house.

The band spent its early years around Deadheads and rebelled with its own covers of the Replacements, the Pixies and Nirvana. The brothers wrote a few of their own songs during that time, but to them, there was never a distinction between originals and covers.

"At the time it was like, 'Our songs don't sound like your songs because this is what we listen to. Lick my balls,'" Bryan says.

Modern-day Tok tears through sets with its tongue planted firmly in cheek. Almost every song follows a pattern of classy hooks leading to big buildups that ultimately pay off with an obligatory bitchin' guitar solo. Tok makes its way within rock clichés, still managing to sound distinct despite the genre's trappings. The band doesn't veer off the beaten path, but it certainly blazes a trail.

The Basler brothers' stage banter might be worth the price of admission alone. Snippets of standup comedy are interrupted by blaring feedback and the four-count click of the drummer's sticks. Bryan is a talker, and he only shuts up when the next song starts. That personality translates to the band's social media, too — Tok's Facebook page is a trash can of pizza, selfies and new music videos.

In 2013 Tok was named "Best Rock Band" in this paper's Best of St. Louis issue. The Baslers responded by mailing us a decapitated head — a Styrofoam one — painted purple with oozing green brains.

Despite a revolving door of drummers, Bryan and Matt have kept Tok alive for twenty years. Mike Chrismer might be the band's most consistent third leg, but he can't commit full time to the band. Drew Gowran of Little Big Bangs often fills in on the skins, and, in extreme cases, Matt will take to drums while another player fills in on bass guitar.

Tok tracked its first record in 2008 at Suburban Pro Studios with Bryan on guitar and Matt on bass and drums, both tackling vocal duties. Months later, the band self-released Long Tall Cobra Box, its first and only proper album to date. Prior to that, the Baslers doled out basement demos recorded in the late '90s — a far cry from a serious studio effort.

"The utility of it is that if you search for Tok, you'll never find us. If you search for Long Tall Cobra Box, we're the only thing that you ever get. It's worked well, in that sense," Matt says. The band toured on that first album in 2009 and has intermittently left St. Louis to play gigs out of town since.

In early 2013 Bryan and Matt took on a new way of releasing music, through the Gold Dollar Hen House series. Instead of spending years on one record, Tok releases less music more often, in five- or six-song bursts.

Although Tebeau initially helped the Baslers through their teens, both brothers take a total hands-on approach to booking, recording and touring today. Matt is firm on doing things his way: "I just have no concept of what's cool. Only what I like and don't like. When I write songs it's never about writing a rock song. I just write a song. However it ends up is however it ends up.

"We don't have anyone reminding anybody that Tok exists between releases. If we're not doing something, no one's paying attention." 