SCREENSHOT FROM THE VIDEO BELOW
Chingy's sartorial choices mark just one of the elements of his new video that the internet has seen fit to mercilessly ridicule.

St. Louis rapper Chingy, best-known to most for his pop-rap singles "Right Thurr" and "Holidae In," but best-known to this reporter/former pizza driver for his tendency to not tip for delivery (we never forget, Howard), released a video for his new song "Jus Like That" last week, and the internet has been roasting him alive ever since.

On YouTube, commenters have honed in on the sound of the song itself, a trappy guns-money-and-drugs affair that marks a significant departure from the radio-friendly St. Louis bounce Chingy is known for, as well as the similarly unfamiliar gangland motif of the accompanying video. (At one point, Ching-a-Ling can be seen cooking up some crack, for example. Which, sure. OK.)

Oh yeah, and also, Chingy is wearing what appears to be a backwards child's zebra-print backpack on his chest in lieu of a shirt throughout. That's raised a few eyebrows too.

Let's have a look at what folks are saying, shall we? 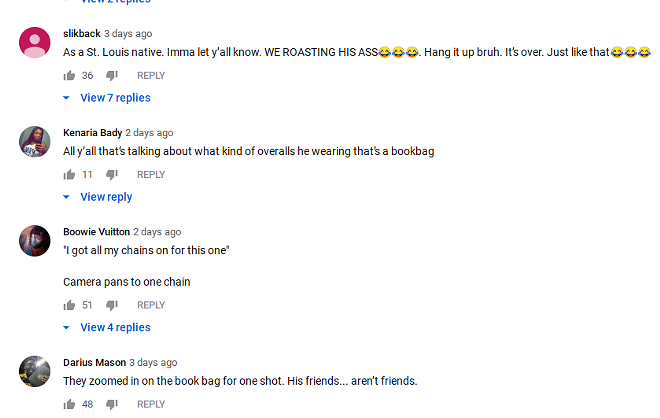 Merciless. Devastating. Just plain uncalled for. The internet, as always, is undefeated.

Now to be fair, there are some who have commented that they like the song, and that they don't see what all the fuss is about. Unfortunately for Chingy, that group looks to be dramatically in the minority. At present the video has more than 392,000 views, which is pretty good until you see that it has been "disliked" far more times than it has been "liked" on the video-streaming service by a ratio of 1,600 to more than 2,000. Clearly this is not ideal.

Watch the video and make up your mind for yourself below. And PSA: Tip your delivery drivers, you cheap bastards.