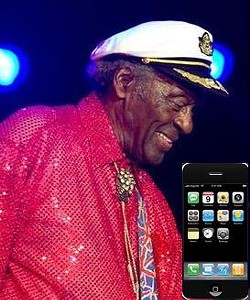 Michael Kilfoy, owner of the St. Louis design/marketing firm Studio X, was getting his laptop worked on around 5:30 p.m last night when a fellow customer at the Apple store caught his eye.

"I see this guy wearing a sailor's cap and I do a double-take," says Kilfoy. "Sure enough, it was Chuck Berry!"

Kilfoy says that soon all the 50 or so customers at the Galleria's Apple store were doing the same: staring at the rock 'n roll legend as he consulted with a service technician.

"I didn't want to interrupt him because I figured everyone would want to come up to him and shake his hand" says Kilfoy. "It looked to me that he was talking to to the Apple guy about an iPod or an iPhone."

Kilfoy adds that the 84-year-old Berry looked to be in fine shape following his recent episode of exhaustion earlier this month.
Yesterday's Chuck Berry sighting wasn't the first time Kilfoy has bumped into a multi-platinum recording artist at the same Apple store. Last Valentine's Day he says he was there for another repair when he struck up a conversation with Wanya Morris of Boys II Men.

"I didn't recognize who he was when we started talking, but he was really nice," says Kilfoy. "He invited me to a concert."
Berry returned to the stage at Blueberry Hill's Duck Room on Wednesday night, incidentally -- and it was business as usual, according to reviewer Aimee Levitt.