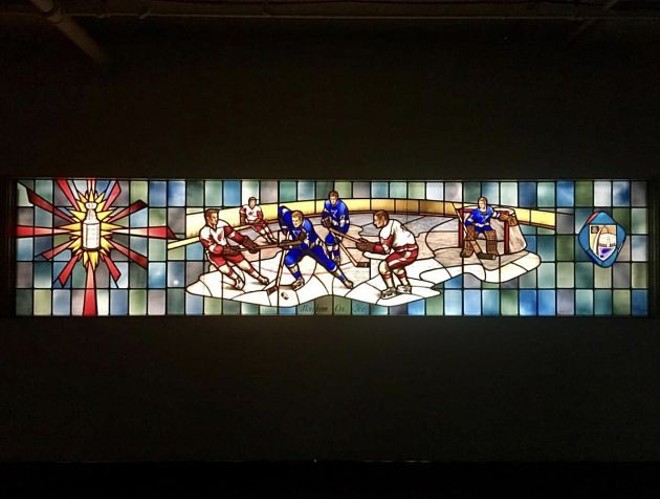 CITY MUSEUM
Blues fans in search of peace and tranquility on this high-stakes day of winner-take-all cold-sporting would do well to follow the advice of the prophet Ice Cube: "If you're scared, go to church."

Of course, when we say "church," we mean the City Museum. That holiest of St. Louis holy houses is opening the doors to its fourth gallery today until 4 p.m. so that anxious hockey fans can come "pay their respects, meditate, or touch 'Mayhem on Ice,'" a hallowed stained glass mural that previously hung in the St. Louis Arena. Admission to do so is free.

Today & tomorrow from 10am till 4pm we’ll open the side door to our 4th gallery for any @StLouisBlues fan to stop by spend a few moments, pay their respects, meditate, or touch “Mayhem on Ice” from the old Arena. Get that piece of mind before game 7. #StanleyCupFinals #StanleyCup pic.twitter.com/oqnBVGjEy6


The piece shows the Blues playing against the Red Wings, with a large Stanley Cup as the prize. For years it could be spotted behind one of three Arena Club bars that were on the premises before the Arena's demolition in 1999. It was created by G. Mowery of W.F. Other & Sons Unique Art Glass Company, according to a plaque accompanying it on City Museum's wall. The Post-Dispatch has an archival photo from the bar that was taken in 1967, but the precise date of its construction is unknown. The scene depicts figures made to look like Blues players Red Berenson and Glenn Hall playing against the Red Wings' Gordie Howe, with the cup on the line.

So while its not a perfect predictor of the future — imagine if those were Bruins Berenson and Hall were defeating! — it's still more than enough to calm the nerves of long-suffering fans in advance of the last game of a record-breaking run for the Cup.

If we take that Cup, though, hopefully things don't stay too calm. After all, the Arch isn't going to push itself into the Mississippi River. Let's go Blues!