Image via
DJ Sno and Nite Owl are two-thirds of Academy Hill.
"What do I have to do to get some shine in the RFT?" That's a question local rappers ask all the time. The answer is simple: make good (preferably great) music, pass along the CD or MP3 and send a reminder when you have an event coming up.

Nobody is better at those three things than Nite Owl. The dude is relentless when it comes to pushing his music. He stopped by RFT global headquarters on Delmar twice in the past two weeks to talk about his show tonight and drop off a copy of his new project, a collaboration with fellow emcee James Christos and DJ Sno called Academy Hill.

The album is called Jewelry. Impression after just one listen: dope production with some old-school DJ scratchin' from the veteran Sno and a slick De La Soul vibe, with Nite Owl and Christos going back and forth on the verses.

Hear the single "What's Going On" and get info on their gig at Cicero's after the jump... 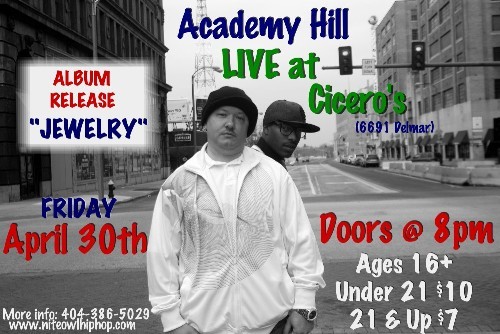