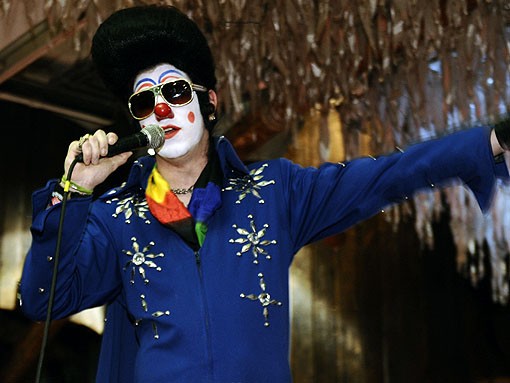 Clownvis Presley, with Little Rachel and the Griddle Kids The Firebird Oct. 12, 2012

I'll be honest: even after 30-odd years, I still think clowns are freaking scary. I'll never understand why parents enjoy parading humanoids with scary makeup, dead eyes and a sinister smile in front of their kids. My own mother made me sleep on a Bozo pillowcase, for crying out loud. Bozo! Who looked like Pennywise from "It!" It's a wonder I'm as emotionally stable as I am.

Clown fear or not, I still feel like a giant fail for living a decade in St. Louis without having witnessed Clownvis Presley (also known as 7 Shot Screamers vocalist Mike Leahy). That's why I forced myself to attend the niche performer's show last night at the Firebird. Surely the silliness of a pompadour, "Fat Elvis" jumpsuit and hokey magic tricks would triumph over my apprehension, right? The highlights:

1. Clownvis took the stage in his blue caped jumpsuit outfitted with silver sparkles and giant belt buckle. Thanks to friends' photos from previous shows, I knew the getup was coming, but I was fairly impressed just the same.

2. Aaaaaand then my eyes moved from the jumpsuit to his head - hair higher than my grandma's, '70s-style sunglasses, giant red nose. Even though Clownvis sang Elvis songs and seemed like a perfectly lovely clown, his makeup still tricked my brain into thinking that he soon would reveal fangs and have me for a post-show snack.

4. Clownvis, who now lives in Hollywood, said he purchased "a new gimmick" at Gibbol's novelty store at Laclede's Landing before the show. He brought out his new illusion, which featured flowers magically rising from a cup, and an audience member shouted that he had that same trick. Clownvis retorted, "Yeah, you and every other son of a bitch who has $20 to spend on magic."

5. After taking someone's library card, the clown implored that "Reading is 'Fun'damental," saying "Your brain is a spongy, muscley thing. You've got to tingle it." Clownvis followed that up with the theme from "Reading Rainbow."

6. Clownvis on '50s rock-and-roll legend the Big Bopper (J.P. Richardson): "Who's celebrating the Big Bopper's birthday tonight? He was the biggest clown in rock history! But the best thing he ever did was die in a plane crash with Buddy Holly. What, too soon?"