Come on Feel the IlliNoise -- Alton's New All-Ages Venue, That Is

Over Memorial Day weekend, I trekked out to Alton, Illinois, to check out IlliNoise, a new all-ages venue in the city. Originally slated to be in Wood River, the venue apparently moved into its space at 554 E. Broadway only eight days before the Saturday I visited.

(Venue is on the far right)
View Larger Map

The building itself was really cool, with plenty of exposed brick in the entire two-story space. (It felt like a former coffeeshop, or cool old house -- since the bathroom had a full shower and everything, I assumed it was a cool old house.) A second floor loft-like area had the bathroom, video games and comfy couches. Light snacks and non-alcoholic drinks were available -- as was free beer, and BBQ on the street.

Head to the back of the venue, which is where the actual performance space is. As you can see from the picture there, the stage itself is raised, in a large room that felt like a racquetball court; on the not-so-hot night, it was steamy and stifling, and so I hope it gets some ventilation by the time summer truly hits. The venue was non-smoking, though, which helped tremendously.

The sound, well, left something to be desired -- which is to be expected, since the room was full of hard surfaces that cause echoes. But the mere fact that there's another all-ages venue in the metropolitan area providing a space for bands and their young fans to go is a big plus. They've already had national touring act the JonBenet, and upcoming shows include an appearance by Rookie of the Year, so IlliNoise is well on its way to being a viable venue. 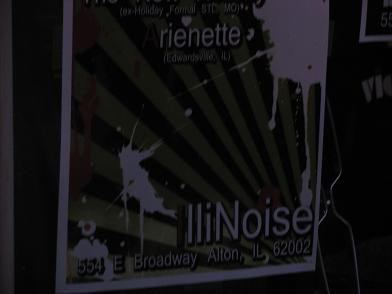