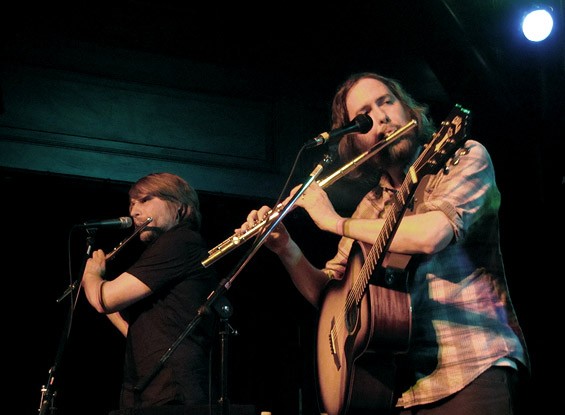 The weather was Midlakian, if ever weather was. Mist and cloud vapors, a drizzle that came and went, all left the streets around the Old Rock House shining. Midlake, a Denton, Texas rock band, hadn't performed in St. Louis in years, likely not since before its first album Bamnam and Silvercork in 2004. The show this evening wouldn't come close to capacity. Absence, obscurity and self-imposed studio ostracism doesn't always pay off.

But sometimes it does, as the septet's hour and a half long set proved that esoteric, '70s British folk rock, played by a motley band of young jazz dudes, can be as bracing and thrilling as any sound in semi-popular music. Timeless is the word that comes to mind when immersing oneself in Midlake, but only if time begins in 1647 and ends in 1974.

Arrayed six across the front, with only drummer McKenzie Smith and a trio of vintage Vox amps behind (this is British rock, remember), the band churned out an opening mic check jam, with relative newcomer Jesse Chandler testing his flute alongside singer and songwriter Tim Smith, who looked like he'd just wandered in from mountain-top exile, a sunburst Guild guitar glowing around him. The jam segued into "Winter Dies," perhaps the most brooding and strange of all the neo-fatalistic pastoral tone poems found on The Courage of Others, Midlake's 2010 raid on Fairport Convention and Pentangle. The sound was awesome, a rolling thunder of four guitars woven together and tuned meticulously, Paul Alexander's bass locked to the kick drum, and Eric Pulido, standing far apart from Smith, but still doubling and harmonizing evenhandedly with the lead singer.