Concert Review: The Breeders at Pop's, Saturday, May 10 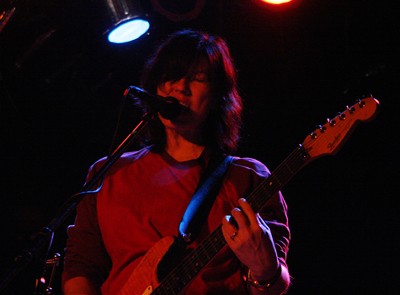 It used to take a lot for me to drag my ass to the East Side. But after last weekend, good ol' Sauget, Illinois, might be one of my favorite places to hang out or see a show. Saturday the Breeders played Pop's, and the whole experience was just so damn pleasant. One would never know they were mere yards from the terrifying, toothless tranny hookers that congregate just on the other side of Route 3.

Before the show I was disappointed to hear that Pop's was going to close off half of the venue (something the venue does at certain shows), but when everyone made it inside, it was clear that this was the right decision. Floor space was tight, but not smashed and the balcony was cozy.

Sure, drinks are always more expensive on that side of the Big Muddy, but the staff was helpful and laid back, showing no signs of the aggro tendencies I've witnessed there during other shows. The staff seemed to recognize that this was a show for sleepy indie folks and acted accordingly. I asked a bartender if he caught the sound check and he said, "I didn't. And you know, I don't know anything about the band. But I'll tell you what: those sure are some nice people. Great smiles, too."

I couldn't have said it better myself. 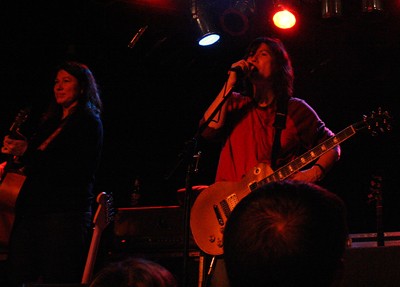 Watching the band is like catching up with old friends. Older songs ("I Just Wanna Get Along," "Divine Hammer") induced much heart-swelling and the newer songs from latest album Mountain Battles ("German Studies," "It's The Love") blended perfectly into these live sets. On stage, Jose Medeles and Mando Lopez, also of pumped-up punkers Fear, kept the rhythm section bumpin' and thumpin' while remaining mostly heard and not seen. New kid Cheryl Lindsay hopped in where needed with extra vocals and instrumentation, and mostly stood calm and still on the side of the stage. 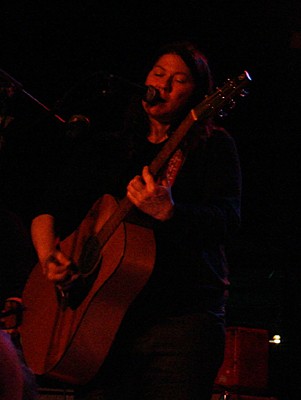 Predictably, Kim and Kelley Deal (and their mega-watt smiles) took center-stage. Both seemed at ease, happy and comfortable with the audience, sharing jokes and answering questions. In addition to Breeders jams, the Deals sang quite a few songs by the Amps (including "Empty Glasses," a rarity), Kim's other band. Kelley graciously stepped into the wings when she wasn't needed during Amps songs, but could still be seen through a rip in the stage curtain rocking out and enthusiastically singing along as if she was a mega-fan. 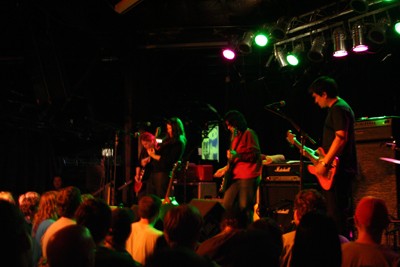