Local Music
This Week in Concerts 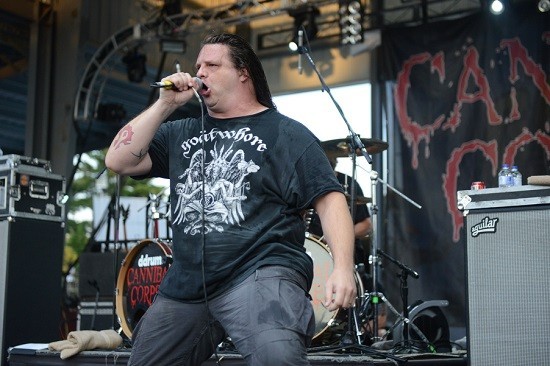 NATE "IGOR" SMITH
Cannibal Corpse
If you were a fan of over-the-top, rubber-faced comedy in the mid-’90s, you’ve probably heard Cannibal Corpse without even realizing it.

The Florida-based death metal band made a cameo appearance in 1994’s Ace Ventura: Pet Detective, in a scene that sees the film’s eponymous hero awkwardly cutting a rug on the dance floor during a song titled “Hammer Smashed Face.” It’s a ridiculous little bit of trivia, but it’s honestly no more ridiculous than anything else about Cannibal Corpse.

Since its 1990 debut Eaten Back to Life, the band has tirelessly peddled an unrelenting style of extreme metal that’s heavy on gore and even heavier on the headbanging. Case in point: Witness the physical anatomy of singer George “Corpsegrinder” Fisher, a man whose neck is significantly thicker than his head — you just don’t grow those kinda muscles without serious and frequent workouts.

Aspiring fellow mutants will no doubt be pleased to hear that the band’s latest, April’s Violence Unimagined, brings plenty of riffage to inspire headbangers to new heights (or widths, as the case may be).

Until Necks Time: Fans of Cannibal Corpse would do well to note that another prodigious purveyor of extreme music is coming to town this week: Cleveland death metal act Nunslaughter will perform at the Sinkhole the night after this show. If your head is still somehow attached to your body Tuesday morning, Nunslaughter will surely finish the job.