Definitive STL '90s Band the Heebie Jeebies is Back with A Greatest Hits Compilation: Interview and Preview 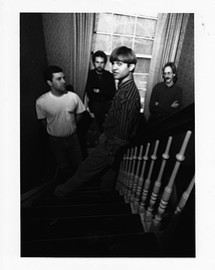 Whether playing 'American Pop' or 'Alternative Rock' the Heebie Jeebies was one of those legendary local pop bands of the 1990s that managed to survive in the minds and toe taps of those who loved its music.

After reforming for the Karate Bikini CD release show at Off Broadway on July 21st, the buzz was back for the Heebie Jeebies, one of St. Louis' most beloved local bands during its heyday. Sonically, the band carefully fused its passion for British Invasion-era pop and smudged it with tinges of garage rock and that poppy jangle sound which was so prevalent in the early post-wave 1990s.

The Heebie Jeebies made two cassettes, a self-titled gem -- The Heebie Jeebies, a crisp amalgamation of guitars, potent percussion and great lyrics -- and its follow up, Better Than Your Boyfriend, which saw the band deepen its sound.

The band played out a lot back then, mostly at Cicero's with friends and bands its members liked. But no matter where they played they always brought a sense of energy and enthusiasm to their live shows. When the band called it a day St. Louis lost not just a great pop band but part of its musical soul.

Thanks to a new compilation CD, STL' 91: The Best Of The Heebie Jeebies, the band's music breathes again. Twelve of its sixteen pop nuggets are found here. From the crunchy openers "I've Been Down" and "Kristen" to the bar band exuberance of "Told You So", the date night romper, "Table For Two", the melodic "Do What You Do" and "None Will Be The Wisser," this compilation makes it abundantly clear that this was a band evolving.

If there ever was such a things as a 'definitive St. Louis sound' in the early '90s, The Heebie Jeebies embodied it. RFT Music interviewed singer/songwriter Kip Loui about the past, present and future of The Heebie Jeebies.

Rob Levy: Where did the idea of the STL 91 Compilation come from?

Kip Loui: I got the idea after stumbling across the DAT master tape that contained sessions that produced our two cassette releases. I was curious how it would all sound digitized and cleaned up, so to speak. The results were surprisingly good, and I thought it would be fun to maybe print up a 100 copies and have a reunion show.

How did the band feel about the project?

The Heebie Jeebies were all game to get together. Our drummer, Nick Barbieri, had recently moved back to STL from Minneapolis, and it was Nick in particular who lit a fire under us and helped coordinate rehearsals and whatnot. Our first practice was equal parts music and old friends reunion. No tension, no egos.... just a bunch of middle aged guys with families playing power chords and screaming songs from 20 years back.