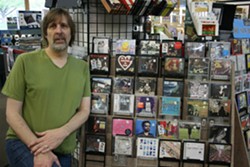 Steve Pick with some of today's releases. Photo by Chrissy Wilmes.

Every week, we'll ask your local record store clerks to advise you on which new releases are worth your hard-earned pennies. Today, Euclid Records clerk (and KDHX DJ) Steve Pick fills us in on the post-Record Store Day crop. He's got good things to say about Dengue Fever and Steve Earle, but don't sleep on new music from tUnE-yArDs, DJ Quik, I'm From Barcelona and Del The Funky Homosapien.

Update: Steve and A to Z were both a little too excited about Steve Earle -- turns out the new album doesn't come out until next week. It is, however, streaming on NPR if you'd like a taste.

"You've come on a slow week," says Pick. "Last week, as you know, was Record Store Day, so the labels put out as much stuff as they could, saving just a few trickles this week. The album that I'm most excited about that I have heard is Dengue Fever, Cannibal... [Tim Rakel of Mayday Orchestra who happened to be perusing the bins chimed in with "Courtship!"] Courtship! Cannibal Courtship. See, our customers, they know! We have wise customers.

Anyway, it's their fourth album and the history of this band... they are from LA and the two brothers went to Cambodia back about ten years ago and fell in love with the old '60s Cambodian pop music. [They] came back to LA, decided to form a band doing that, and found a Cambodian emigrace singer. So she sings lead, and she has this really cool voice. They started out doing covers, then they started writing their own material in that genre, now they've expanded to doing more English-language stuff, as well as some Cambodian. It's a lot of fun.

The album that I'm most excited to hear that I haven't heard yet is the new Steve Earle, I'll Never Get Out of This World Alive. I've been a fan of Steve Earle forever, so I'm always looking forward to a new record of his. This one's produced by T-Bone Burnett, who produces a good third of all the records that come out, I think [laughs]. That should be really good. That'll probably actually be the biggest seller of anything that's out this week. Other than that there's just a few dribs and drabs of things. One of them might be the best record in the world that I haven't heard of yet."

A promo video for Cannibal Courtship